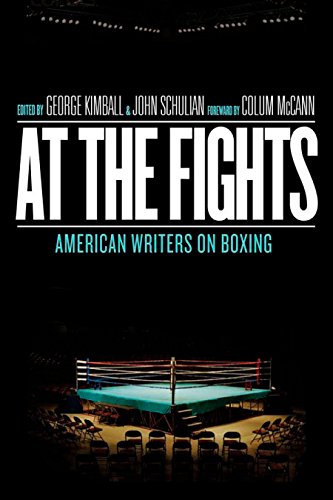 At the Fights: American Writers on Boxing Summary

American writers have been fascinated by the ring, both the primal contest inside the ropes and the crazy carnival world outside them. From neighborhood gyms and smoke-filled arenas to star-studded casinos and exotic locales, they have chronicled unforgettable stories about determination and dissipation, about great champions and punch-drunk has-beens, about colorful entourages and outrageous promoters, and, inevitably along the way, about race, class, and violence in America. Like baseball, boxing has a vivid culture and language all its own, one that has proven irresistible to career journalists and literary writers alike.
The Library of America presents a gritty and glittering anthology of a century of the very best writing and reportage about the fights. Here are Jack London on the immortal Jack Johnson; H. L. Mencken and Irvin S. Cobb on Jack Dempsey vs. Georges Carpentier, dubbed "The Fight of the Century"; Richard Wright on Joe Louis's historic victory over Max Schmeling; A. J. Liebling's brilliantly comic portrait of a manager who really identifies with his fighter; Jimmy Cannon on the inimitable Archie Moore; James Baldwin and Gay Talese on the haunted Floyd Patterson; George Plimpton on Muhammad Ali and Malcolm X; Norman Mailer on the "Rumble in the Jungle"; Mark Kram on the "Thrilla in Manila"; Pete Hamill on legendary trainer and manager Cus D'Amato; Mark Kriegel on Oscar de la Hoya; and David Remnick and Joyce Carol Oates on Mike Tyson. National Book Award-winning novelist Colum McCann (Let the Great World Spin) weighs in with a foreword.

Customer Reviews - At the Fights: American Writers on Boxing

At the Fights: American Writers on Boxing Reviews

"A knockout of a collection. Some of the finest boxing writing--or sports writing, period--I've ever encountered." --Dennis Lehane

George Kimball (1943-2011) was a longtime sportswriter (Boston Herald) and the author of Four Kings: Leonard, Hagler, Hearns, Duran and the Last Great Era of Boxing. John Schulian was a sports columnist for the Chicago Sun-Timesand Philadelphia Daily News before moving to Hollywood, where he was, among other things, the co-creator of Xena: Warrior Princess. He is the author of Writers' Fighters and Other Sweet Scientists. Both Kimball and Schulian received the Nat Fleischer Award for Excellence in Boxing Journalism, awarded by the Boxing Writers Association of America, and in addition to At the Fights, they co-edited The Fighter Still Remains: A Celebration of Boxing in Poetry and Song from Ali to Zevon.