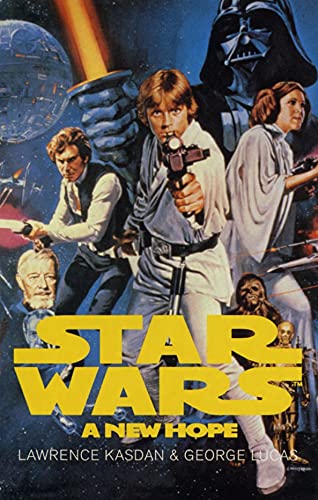 The phenomenal success of George Lucas's first Star Wars trilogy quite simply revolutionized the cinema; but what sets Lucas's films apart from their legion of imitators is the quality of their screenplays. Lucas originally intended this trilogy to be a single film, but the epic scope of the story (combining hi-tech, sci-fi cinephilia with elements of Arthurian myth and mysticism) demanded that it be split into three. The first panel of the triptych is A New Hope. A long time ago, in a galaxy far, far away, young Luke Skywalker leads a dull, isolated existence on his uncle's homestead. One day, two androids, C3PO and R2D2, show up bearing a message from Princess Leia, the leader of the rebel forces engaged in a struggle against the vicious tryranny of the Empire - as personified by the rasping presence of Darth Vader. The message leads Luke to realize his heritage as a Jedi Knight. He sets out on a wild adventure across the galaxy and, together with Leia and rogue pilot Han Solo, attempts to thwart the Empire by destroying its menacing base of operations: the Death Star.

"Cinematography is not about technology. It's about art, it's about taste. In the end it's about understanding your craft."
- GEORGE LUCAS
""FRAMES" is about allowing the reader the time and the space to examine fully that ("cinematography") craft."
- J.W. RINZLER, Executive Editor, LucasFilm
Author of "The Making of Star Wars"

GOR001415406
Star Wars by George Lucas
George Lucas
FF Classics
Used - Very Good
Paperback
Faber & Faber
2000-02-21
192
0571202993
9780571202997
N/A
Book picture is for illustrative purposes only, actual binding, cover or edition may vary.
This is a used book - there is no escaping the fact it has been read by someone else and it will show signs of wear and previous use. Overall we expect it to be in very good condition, but if you are not entirely satisfied please get in touch with us.