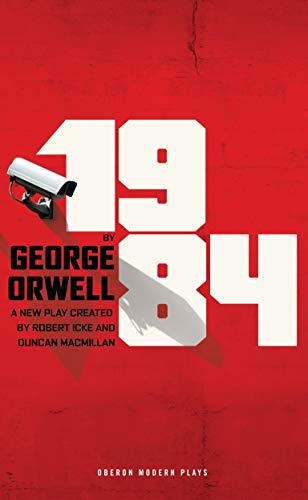 An edited and updated version of the script that ties in with the 2017 Broadway production.

April, 1984. Winston Smith, thinks a thought, starts a diary, and falls in love. But Big Brother is watching him, and the door to Room 101 can swing open in the blink of an eye. Its ideas have become our ideas, and Orwell's fiction is often said to be our reality. The definitive book of the 20th century is re-examined in a radical new adaptation exploring why Orwell's vision of the future is as relevant as ever. An edited and updated version of the script of this critically acclaimed adaptation, to tie in with the new Broadway production.
"This is a staging that reconsiders a classic with such steely power that it chills brain, blood and bone." -- The Times * The Times *
"A work of extraordinary quality and intensity." -- Independent * The Independent *
"[A] pitilessly brilliant retelling of the doomed love affair between Winston and Julia." -- The Guardian * The Guardian *
"This risk-taking adaptation of George Orwell's masterpiece is doubleplusgood." -- Telegraph * The Telegraph *
Robert Icke is an award-winning writer and director. He is currently Associate Director of the Almeida, where his work includes adapting and directing the multi-award-winning Oresteia (also West End), Mary Stuart, Uncle Vanya, and, with Duncan Macmillan, adapting and directing the smash-hit 1984, which has toured the world, played three seasons in the West End and won several major awards. His directing work includes Hamlet, Iliad, Odyssey, The Fever, Mr Burns (Almeida) and The Red Barn (National). Eric Arthur Blair (25 June 1903 21 January 1950), better known by his pen name George Orwell, was an English novelist and journalist, whose most famous works include the novella Animal Farm, and the classic dystopia 1984. Duncan Macmillan is an award-winning writer and theatre director whose plays include Lungs, Every Brilliant Thing and 2071 (all published by Oberon Books). His play People, Places and Things transferred from the National Theatre to the West End in 2016.Duncan Macmillans other plays include: 1984, co-adapted/co-directed with Robert Icke (Headlong/Nottingham Playhouse, UK tour, Almeida Theatre and West End); The Forbidden Zone (Salzburg Festival/Schaubuhne Berlin); Wunschloses Ungluck, adapt. Peter Handke (Burgtheater Vienna); Reise durch die Nacht, adapt. Friederike Mayro?cker created with Katie Mitchell and Lyndsey Turner (Schauspielhaus Ko?ln, Theatertreffen, Festival dAvignon), Atmen (Schaubuhne Berlin); Monster (Royal Exchange/Manchester International Festival).
GOR010892438
9781786822222
1786822229
1984 by George Orwell
George Orwell
Oberon Modern Plays
Used - Like New
Paperback
Bloomsbury Publishing PLC
2017-05-01
96
N/A
Book picture is for illustrative purposes only, actual binding, cover or edition may vary.
The book has been read, but looks new. The book cover has no visible wear, and the dust jacket is included if applicable. No missing or damaged pages, no tears, possible very minimal creasing, no underlining or highlighting of text, and no writing in the margins
Trustpilot