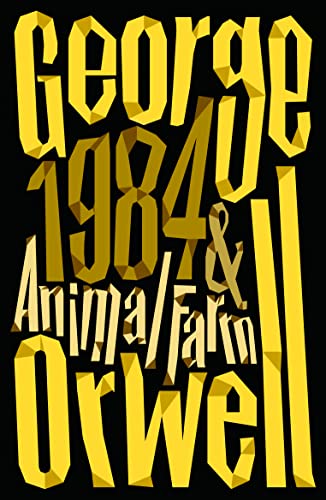 Two modern classics in one volume.

Two modern classics in one volume.

George Orwell is one of the finest and most influential writers of the twentieth century. Here in one volume, are two of his best-known works of electrifying political fiction, 1984 and Animal Farm.

Winston Smith rewrites history. It's his job. Hidden away in the Ministry of Truth, he helps the Party and the omnipresent Big Brother control the people of Oceania. But a seed of rebellion has begun to grow in Winston's heart - one that could have devastating consequences.

The animals of Manor Farm have tired of Farmer Jones. When the boar, Old Major, shares his revolutionary plans, the animals are convinced they can thrive on their own. But as the pigs vie for power, they begin to bear an uncanny resemblance to the very tyrants they had overthrown ...

Captivating readers since the mid-twentieth century, the enduring popularity of 1984 and Animal Farm are testament to Orwell's powerful, prophetic prose.

NGR9780008460983
9780008460983
0008460981
Animal Farm and 1984 Nineteen Eighty-Four by George Orwell
George Orwell
New
Paperback
HarperCollins Publishers
2021-01-07
528
N/A
Book picture is for illustrative purposes only, actual binding, cover or edition may vary.
This is a new book - be the first to read this copy. With untouched pages and a perfect binding, your brand new copy is ready to be opened for the first time
Trustpilot