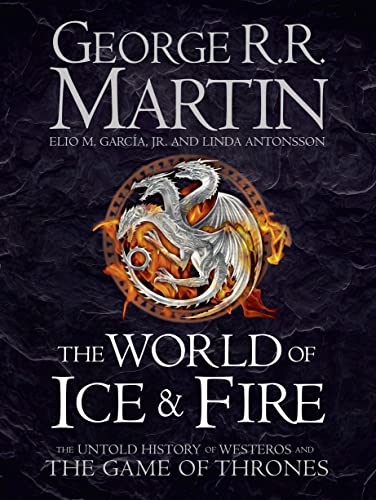 The World of Ice and Fire
by George R. R. Martin

The never-before-seen history of Westeros and the lands beyond. With hundreds of pages of all-new material from George R.R. Martin.

The World of Ice and Fire Summary

The World of Ice and Fire: The Untold History of Westeros and the Game of Thrones by George R. R. Martin

The never-before-seen history of Westeros and the lands beyond. With hundreds of pages of all-new material from George R.R. Martin.

If the past is prologue, then George R.R. Martin's masterwork-the most inventive and entertaining fantasy saga of our time-warrants one hell of an introduction. At long last, it has arrived with THE WORLD OF ICE AND FIRE.

George R.R. Martin, in collaboration with Elio M. Garcia, Jr. and Linda Antonsson, has written a comprehensive history of the Seven Kingdoms, featuring the epic battles, bitter rivalries, and daring rebellions that lead up to the events in the bestselling A Song of Ice and Fire series.

Collected within this volume is the accumulated knowledge, scholarly speculation, and inherited folk tales of maesters and septons, maegi and singers, including over 170 full-colour illustrations and maps, family trees for the Houses Stark, Lannister and Targaryen, and in-depth explanations of the history and culture of Westeros.

This is the definitive companion volume to George R.R. Martin's dazzlingly conceived universe; THE WORLD OF ICE AND FIRE is indeed proof that the pen is mightier than a storm of swords.

The World of Ice and Fire Reviews

'Of those who work in the grand epic fantasy tradition, George R.R. Martin is by far the best'
Time Magazine

'Colossal, staggering... Martin captures all the intoxicating complexity of the Wars of the Roses or Imperial Rome in his imaginary world ... one of the greats of fantasy literature'
SFX

'The sheer-mind-boggling scope of this epic has sent other fantasy writers away shaking their heads ... Its ambition: to construct the Twelve Caesars of fantasy fiction, with characters so venomous they could eat the Borgias'
Guardian

In a collaboration that's been years in the making, George R.R. Martin has teamed with Elio M. Garcia, Jr. and Linda Antonsson - the founders of the renowned fan site Westeros.org - perhaps the only people who know this world almost as well as its visionary creator.

George R.R. Martin is the author of fifteen novels and novellas, including five volumes of A Song of Ice and Fire, several collections of short stories, as well as numerous screenplays for television drama and feature films. Dubbed 'the American Tolkien', George R.R. Martin has won numerous awards including the World Fantasy Lifetime Achievement Award. He is an Executive Producer of HBO's Emmy Award-winning GAME OF THRONES, which is based on his A Song of Ice and Fire series. He lives in Santa Fe, New Mexico.

GOR006564493
The World of Ice and Fire: The Untold History of Westeros and the Game of Thrones by George R. R. Martin
George R. R. Martin
Used - Like New
Hardback
HarperCollins Publishers
2014-10-28
336
0007580916
9780007580910
N/A
Book picture is for illustrative purposes only, actual binding, cover or edition may vary.
The book has been read but remains in clean condition. All pages are intact and the cover is intact. Some minor wear to the spine.