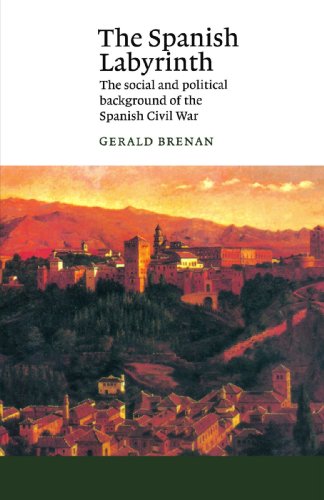 The Spanish Labyrinth
by Gerald Brenan

The Spanish Labyrinth: An Account of the Social and Political Background of the Spanish Civil War by Gerald Brenan

Gerald Brenan's The Spanish Labyrinth has become the classic account of the background to the Spanish Civil War. Written during and immediately after the Civil War, this 1990 book has all the vividness of the author's experience. It represents a struggle to see the issues in Spanish politics objectively, whilst bearing witness to the deep involvement which is the only possible source of much of this richly detailed account. As a literary figure on the fringe of the Bloomsbury group, Gerald Brenan lends to this narrative an engaging personal style that has become familiar to many thousands of readers over the decades since it was first published.

' ... shows the expert, subtle-minded and sometimes cynically truthful, in his quest of what really has created modern Spain ... careful, sympathetic and judicial'. Cyril Connolly The Observer
"Written with wit, lucidity and a Gibbon-like sweep--as well as a human detail earned by years of living in southern Spain--it was an inspiration to such later historians as Raymond Carr and Hugh Thomas." Los Angeles Times Book Review

Preface to the second edition; Preface to the first edition; Chronological table; Political divisions; Part I. The Ancien Regime 1874-1931: 1. The Restoration, 1884-98; 2. The parliamentary regime and the Catalan question, 1898-1909; 3. The Liberals and the Church; 4. The army and the Syndicalist struggle in Barcelona 1916-23; 5. The dictatorship; Part II. The Condition of the Working Classes: 6. The Agrarian question; 7. The Anarchists; 8. The Anarcho-syndicalists; 9. The Carlists; 10. The Socialists; Part III. The Republic: 11. The Constituent Cortes; 12. The Bienio Negro; 13. The Popular Front; 14. Epilogue-the Civil War; Three sketch maps; Appendices; Bibliography; Index.

GOR001715307
The Spanish Labyrinth: An Account of the Social and Political Background of the Spanish Civil War by Gerald Brenan
Gerald Brenan
Canto
Used - Very Good
Paperback
Cambridge University Press
1990-09-13
414
0521398274
9780521398275
N/A
Book picture is for illustrative purposes only, actual binding, cover or edition may vary.
This is a used book - there is no escaping the fact it has been read by someone else and it will show signs of wear and previous use. Overall we expect it to be in very good condition, but if you are not entirely satisfied please get in touch with us.