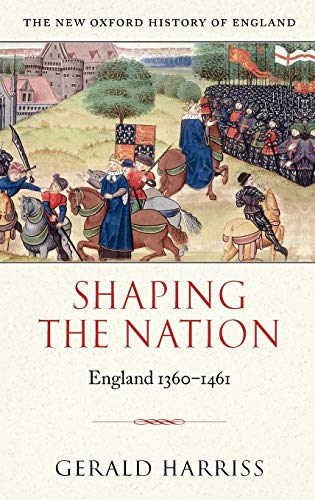 The Black Death, the Peasants' Revolt, the Hundred Years War, the War of the Roses... A succession of dramatic social and political events reshaped England in the period 1360 to 1461. In his lucid and penetrating account of this formative period, Gerald Harriss illuminates a richly varied society, as chronicled in The Canterbury Tales, and examines its developing sense of national identity.

The Black Death, the Peasants' Revolt, the Hundred Years War, the War of the Roses... A succession of dramatic social and political events reshaped England in the period 1360 to 1461. In his lucid and penetrating account of this formative period, Gerald Harriss draws on the research of the last thirty years to illuminate late medieval society at its peak, from the triumphalism of Edward III in 1360 to the collapse of Lancastrian rule. The political narrative centres on the deposition of Richard II in 1399 and the establishment of the House of Lancaster, which was in turn overthrown in the Wars of the Roses. Abroad, Henry V's heroic victory at Agincourt in 1415 led to the English conquest of northern France, lasting until 1450. Both produced long term consequences: the first shaped the English constitution up to the Stuart civil war, while the second generated lasting hostility between England and France, and a residual wariness of military intervention in Europe. Equally significant changes occurred in English society. The Black Death produced a crisis in agrarian structures, marked by the Peasants' Revolt in 1381 and the end of serfdom. In landed society distinctive grades of knights, esquires and gentlemen emerged, linked to the nobility in a web of patronage and service, with an ethos of 'good lordship' and fidelity. While the nobility were the king's immediate counsellors, the gentry reflected the concerns of the community of the realm in parliament. An increasingly well-educated and articulate class, they served as MPs and JPs and staffed the growing legal profession. The greater merchants controlled the wool trade, the source of England's wealth, and distributed commodities through a network of towns and markets. The marked individualism of this society, memorably depicted in The Canterbury Tales, was accompanied by a growing sense of national identity, expressed in the use of standard London English. A spate of church building in perpendicular, a distinctive national style, was matched on the one hand by the intensity of Catholic devotion and on the other hand by the proto-Protestantism of John Wyclif and the Lollards. THE NEW OXFORD HISTORY OF ENGLAND The aim of the New Oxford History of England is to give an account of the development of the country over time. It is hard to treat that development as just the history which unfolds within the precise boundaries of England, and a mistake to suggest that this implies a neglect of the histories of the Scots, Irish, and Welsh. Yet the institutional core of the story which runs from Anglo-Saxon times to our own is the story of a state-structure built round the English monarchy and its effective successor, the Crown in Parliament. While the emphasis of individual volumes in the series will vary, the ultimate outcome is intended to be a set of standard and authoritative histories, embodying the scholarship of a generation.
well written, comprehensive, and balanced in its judgements. * John S Moore, Economic History Review *
there can be little doubt that Shaping the Nation will not only rapidly establish itself as the first book one would wish to place in the hands of an undergraduate or interested non-specialist [...] but will also stand the test of time as a monument to the depth and breadth of scholarship on the society [...] of late medieval England during the second half of the twentieth century [...] Yet this is certainly not just a book for under-graduates or non-specialists; the range of its scholarship and the wisdom of its pronouncements make it a book from which specialists can learn a great deal. It takes a special kind of book to get it right for both types of audience, but that is the measure of Gerald Harris's achievement. * The English Historical Review *
Outstanding book...Harriss brings extraordinary scholarship to the task of illuminating a path through this demanding terrain. He has produced a survey of stunning bredth and crystalline judgement. At more than 600 closely-argued pages, Shaping the Nation is not in any sense a light read. But as an insight into the complex reality of late medieval life, it is matchless. * The Guardian *
This is a beautifully written book. Gerald Harriss' volume in the New Oxford History of England is immensely readable and full of memorable insight and incident...engaging volume...Harriss is a master at encapsulating complex truths in vivid images. * BBC History *
Superbly done, simultaneously exciting and informative, a remarkable achievement in a book of this nature: Dr Harriss writes with a rare lucidity which never surrenders to over-simplification on the one hand or to over-elaboration on the other. Harriss is not summarizing. He is giving us a new history. * TLS *
erudite and wide-ranging * Sunday Times *
PART 1: POLITICAL SOCIETY ; PART 2: WORK AND WORSHIP ; PART 3: MEN AND EVENTS
GOR004334016
9780198228165
0198228163
Shaping the Nation: England 1360-1461 by Gerald Harriss (Emeritus Fellow, Magdalen College, Oxford)
Gerald Harriss (Emeritus Fellow, Magdalen College, Oxford)
New Oxford History of England
Used - Very Good
Hardback
Oxford University Press
20050127
727
null null null null null null null null null null
Book picture is for illustrative purposes only, actual binding, cover or edition may vary.
This is a used book - there is no escaping the fact it has been read by someone else and it will show signs of wear and previous use. Overall we expect it to be in very good condition, but if you are not entirely satisfied please get in touch with us
Trustpilot