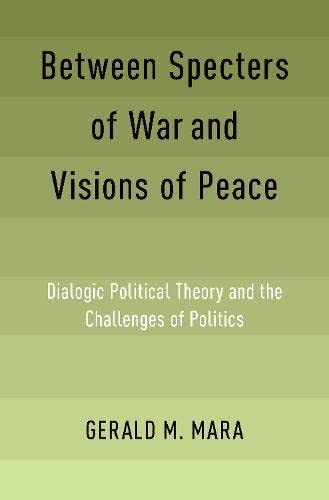 Used Price
$23.49
inc. GST
Free Shipping in Australia
This book examines how ideas of war and peace have organized frames of reference within the history of political theory. It argues for a political philosophy that takes both conditions seriously and for a style of political theory committed to questioning rather than closure.
Reviews:
Trustpilot
Very Good

Between Specters of War and Visions of Peace Summary

Since the beginning of the twenty-first century, recurring political violence at both state and non-state levels has eroded confidence in the progressively peaceful character of international relations, and has unsettled the parameters of political thought. Frames of peace and frames of war have, throughout Western thought, colored the questions that we ask about politics, the descriptions of the pragmatic and moral alternatives that we face, and the ideas and metaphors that we use at any given moment. These frames, as this book argues, also obscure too much of political life. Gerald M. Mara proposes, instead, a political philosophy that takes both war and peace seriously, and a style of theory committed to questioning rather than closure. He challenges two powerful currents in contemporary political philosophy: the verdict that "premodern" or "metaphysical" texts cannot speak to modern and postmodern societies and the insistence that all forms of political theory be some form of democratic theory. Mara reexamines seminal texts in the history of political theory, from Thucydides to Jacques Derrida, and from Machiavelli to Judith Butler, to examine how frames of reference of war and peace have structured both the writing of these texts, as well as interpretations of them. The result is not a linear history of ideas, but a series of conversations between them, and a democratic justification for moving beyond democratic theory.

Customer Reviews - Between Specters of War and Visions of Peace

Between Specters of War and Visions of Peace Reviews

Mara moves effortlessly from Derrida to Thucydides via Hegel, Nietzsche, and many others, all the while providing a brilliant restatement and a spirited defense of democratic principle. In order to unearth critical resources for democratic citizens, Mara recreates a theoretical dialogue that will surprise and enlighten even the most sophisticated readers. In the process, he illustrates the continuities between theoretical debate and the everyday political discussions of democratic citizens. Mara's dialogic political theory is perfectly suited to grapple with the complexities of war and peace and is bound to transform our understanding of our own democratic ideals, judgments, and aspirations. * Ryan Balot, University of Toronto *
Ambitious, compelling, and immensely erudite, this book re-theorizes the history of political thought. Studying paired sequences of thinkers across time, whose philosophies about war or peace threaten to produce political theory as itself an art of war, Gerald Mara offers as a path-breaking antidote "dialogic political theory." With help from Plato and Thucydides, Mara demonstrates the persistent imperatives of both war and peace as framing conditions for thoughtful citizens in times of regime stress and human precarity. * Jill Frank, author of Poetic Justice: Rereading Plato's Republic *
By pairing contemporary and seminal thinkers, Mara allows them to interrogate and challenge each other, often discovering surprisingly commonalities. Each pairing, in turn, deepens the dialogue, which transcends binaries between war and peace, between the tragic recognition of inevitable conflict and the enlightened attempt at resolution. His exemplary and original approach to political theorizing deserves to become a major voice in both contemporary theory and in the study of political philosophy. * Mary P. Nichols, Baylor University *
Mara aims at nothing less than a new approach to the tradition of Western and pre-Western political philosophy, an approach that highlights the project of raising fundamental and usually unasked questions about war and peace, and about political life generally. This means rejecting the idea that the primary value to us of this philosophic tradition is that it supplies a series of systematic answers to such questions. Such answers are, for Mara, undeniably there in the texts of the tradition, and he pursues them with thought and care in chapter after chapter. * Stephen Salkever, Bryn Mawr College *
In his wonderfully perceptive and provocative book, Gerald Mara skillfully chastises those who would separate philosophy from politics. Through a series of startling juxtapositions of assorted texts from the history of Western thought, Mara masterfully uncovers the limits of a binary framing that opposes war to peace, until the final chapter where intertwined readings of Plato and Thucydides expose the interdependence of peace and disruption, of philosophy and politics. Mara thereby engages his readers in a "conversational political theory" that becomes the model for critical citizenship. * Arlene W. Saxonhouse, author of Free Speech and Democracy in Ancient Athens *
14/01/2019

Gerald M. Mara is Affiliate Professor of Government and Dean Emeritus of the Graduate School of Arts and Sciences at Georgetown University. His research interests are classical political philosophy, historical and contemporary liberalism, and democratic political theory. He is the author of Socrates' Discursive Democracy and The Civic Conversations of Thucydides and Plato.