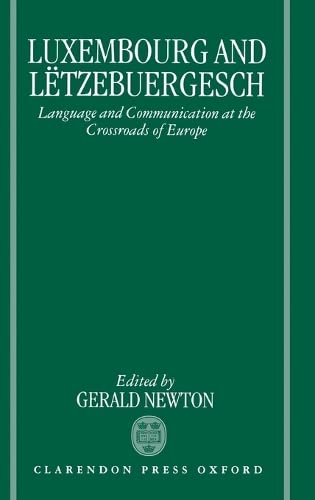 Used Price
$122.99
inc. GST
Free Shipping in Australia
This collection of linguistic essays focuses on Luxembourg and its national language, Letzebuergesch. The contributors examine patterns of linguistic communication involving French, German and English as well as Letzebuergesch in a nation which is at one with all four languages.
Reviews:
Trustpilot
Very Good

The Grand Duchy of Luxembourg sits at the heart of the European Union, yet it forms a very private and close-knit community. The book addresses that apparent paradox, and shows how it is reflected in and sustained by the linguistic practices of the people who live there, both native and foreign. Letzebuergesch, the country's national language, is most closely related to the German dialects of the western Rhineland and the Moselle river valley, but the country's historical and cultural links with Belgium, the Netherlands, and France are much closer than with Germany. Since the demise of Latin in the late Middle Ages as the language of administration, that role has been filled at various times by the standard varieties of French and German. Declared a protected neutral country in 1867, Luxembourg has been twice invaded by Germany in the twentieth century. But since 1945 French and Letzebuergesch have come to predominate and the use of German has once again receded. It is the unwritten social code governing the use of these languages (and latterly also of English) which gives this volume of specially commissioned papers its focus: the purpose is to provide an insider's view of the community, and of its little-known language. The book contains the most detailed linguistic description of Letzebuergesch so far available in English.

The book is comprpehensive, well-ordered, and written in clear intelligible diction throughout. It is to be hoped that it will contribute to a better understanding of Luxemburgers and their language throughout the English-speaking world. * Manfred Goerlach, University of Cologne, Linguistics 35 (1997) *
Newton has done us a great service in producing a collection of ten original state-of-the-art papers in English by himself and three other leading scholars in the field...the volume will be of great interest to anyone interested in trilingualism, polyglossia, language planning, language and identity, or lesser-used languages...Newton must be congratulated on presenting us, in 250 pages, an excellent account of this complex language situation...informative, stimulating, and extremely readable...The whole volume is lucid and coherent. * Language in Society *