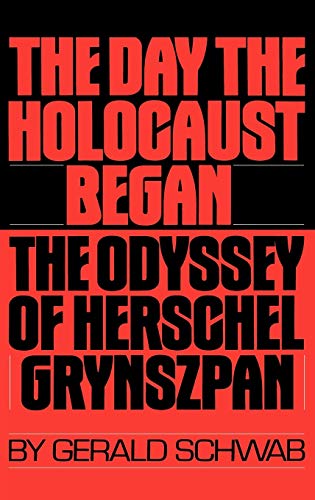 The Day the Holocaust Began by Gerald Schwab

Anyone interested in modern European history, the Nazi Government, the persecution of the European Jews, as well as students of the Holocaust and its many ramifications, will find The Day the Holocaust Began invaluable reading.

The Day the Holocaust Began: The Odyssey of Herschel Grynszpan by Gerald Schwab

On November 7, 1938, Herschel Grynszpan, a 17-year old Polish-German Jew, walked into the German Embassy in Paris and shot Third Secretary, Ernst vom Rath, who died shortly after. Vom Rath's death triggered the destruction and mahem which became known as Kristallnacht, or The Night of Broken Glass, resulting in the death of hundreds, the razing of 265 synagogues and 200 houses, the demolition of 7,500 business establishments, and the incarceration of 30,000 Jews in concentration camps. Herschel Grynszpan was immediately arrested. France's foremost criminal lawyer took over his defense. On June 8, 1940, two days before the French Government evacuated Paris, the youth was indicted for murder. A month later he was in Nazi hands, being interrogated by the Gestapo in anticipation of a major show trial.

Little has been known in the past about this extraordinary young man. Using German documents never before revealed, including a startling coded testament, Gerald Schwab examines his background and the events culminating in the shooting. The book describes, in considerable detail, Grynszpan's experiences in French and German hands and his trial which was to become Nazi Germany's justification of the Holocaust. It also challenges some commonly held ideas about the cause of the shooting and its aftermath. The Day the Holocaust Began describes the life of a mixed-up, emotionally immature youngster who developed into one of the most amazing and unlikely heroes of modern history, demonstrating the power of the human spirit against overwhelming odds. Anyone interested in modern European history, the Nazi Government, the persecution of the European Jews, as well as students of the Holocaust and its many ramifications, will find The Day the Holocaust Began invaluable reading.

GERALD SCHWAB was born and raised in Germany. After the events of Kristallnacht he and his family emigrated to the United States. In 1946 he served as translator/interpreter at the International War Crimes Tribunal in Nuremberg followed by a career in the State Department.

Introduction November 7, 1938 The Death of vom Rath The Victim The Aftermath--Kristallnacht (The Night of Broken Glass) World Reaction Growing Up Jewish in Hitler's Germany Grynszpan's Emigration-- Life in Paris The Deportation of the Grynszpan Family From Despair to Vengeance The Prosecution The Defense Team The Trial of Abraham and Chawa Grynszpan A Complex Character Moves and Countermoves Evacuation from Paris--Extradition to Germany A German Trial for Herschel Grynszpan--A Proposal A House Divided--Nazi Trial Preparations The Trial The Problem of Paragraph 175 The End? Summing Up Epilogue Dramatis Personae Bibliography Index
GOR011533484
9780275935764
0275935760
The Day the Holocaust Began: The Odyssey of Herschel Grynszpan by Gerald Schwab
Gerald Schwab
Used - Well Read
Hardback
ABC-CLIO
1990-11-09
240
N/A
Book picture is for illustrative purposes only, actual binding, cover or edition may vary.
This is a used book. We do our best to provide good quality books for you to read, but there is no escaping the fact that it has been owned and read by someone else previously. Therefore it will show signs of wear and may be an ex library book
Trustpilot