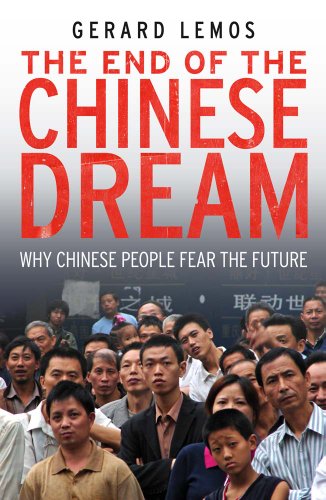 The End of the Chinese Dream
by Gerard Lemos

Out of Stock
$19.49
inc. GST
Glossy television images of happy, industrious and increasingly prosperous workers show a bright view of life in twenty-first-century China. But behind the officially approved story is a different reality. The author offers a revealing account of the thoughts and feelings of Chinese people regarding all facets of their lives.
Very Good
Only 0 left

The End of the Chinese Dream Summary

The End of the Chinese Dream: Why Chinese People Fear the Future by Gerard Lemos

Glossy television images of happy, industrious, and increasingly prosperous workers show a bright view of life in twenty-first-century China. But behind the officially approved story is a different reality. Preparing this book Gerard Lemos asked hundreds of Chinese men and women living in Chongqing, an industrial mega-city, about their wishes and fears. The lives they describe expose the myth of China's harmonious society. Hundreds of millions of everyday people in China are beleaguered by immense social and health problems as well as personal, family, and financial anxieties-while they watch their communities and traditions being destroyed.

Lemos investigates a China beyond the foreigners' beaten track. This is a revealing account of the thoughts and feelings of Chinese people regarding all facets of their lives, from education to health care, unemployment to old age, politics to wealth. Taken together, the stories of these men and women bring to light a broken society, one whose people are frustrated, angry, sad, and often fearful about the circumstances of their lives. The author considers the implications of these findings and analyzes how China's community and social problems threaten the ambitious nation's hopes for a prosperous and cohesive future. Lemos explains why protests will continue and a divided and self-serving leadership will not make people's dreams come true.

The End of the Chinese Dream Reviews

'The End of the Chinese Dream challenges everything we believe about China. This is a book that must be read by anyone who struggles to understand the greatest experiment underway in the world today.' - John Gray, Emeritus Professor of European Thought, London School of Economics, and author of False Dawn: The Delusions of Global Capitalism -- John Gray
'The End of the Chinese Dream is highly original and unusual. Gerard Lemos has written with real insight into the fears and dreams of ordinary Chinese people. Anyone who wants to get behind misleading headlines about China should read this important book.' - Zhou Xun, Department of History, University of Hong Kong -- Zhou Xun

"A much-needed and remarkably well-timed glimpse into the underbelly of this Asian tiger...original...in the rigor and the depth of its human storytelling."-Geoffrey Cain, The New Republic

"This is a welcome and highly readable account of the travails wrought on China's people by history's most powerful plutocracy."-Frank Dikotta, The Sunday Times

Gerard Lemos, a social policy expert, was a visiting professor at Chongqing Technology and Business University between 2006 and 2010 and chaired the board of the British Council from 2008 to 2010. He lives in London.

GOR005584488
The End of the Chinese Dream: Why Chinese People Fear the Future by Gerard Lemos
Gerard Lemos
Used - Very Good
Paperback
Yale University Press
2013-10-01
320
0300197217
9780300197211
N/A
Book picture is for illustrative purposes only, actual binding, cover or edition may vary.
This is a used book - there is no escaping the fact it has been read by someone else and it will show signs of wear and previous use. Overall we expect it to be in very good condition, but if you are not entirely satisfied please get in touch with us.