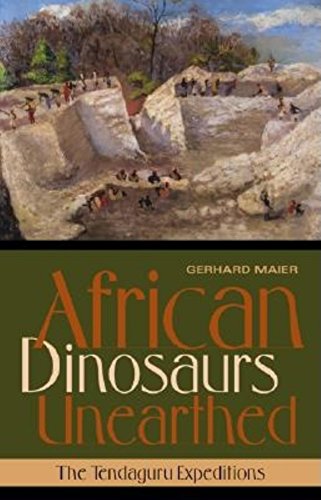 In Stock
$85.99
inc. GST
The story of expeditions into Africa in search of dinosaur bones.
Very Good
Only 1 left

From 1907 to 1931 at Tendaguru, a remote site in present-day Tanzania, teams of German (and later British) paleontologists unearthed 220 tons of fossils, including the bones of a new dinosaur, one of the largest then known. For decades the mounted skeleton of this giant, Brachiosaurus, was the largest skeleton of a land animal on exhibit in the world. The dinosaur and other animal fossils found at Tendaguru form one of the cornerstones of our understanding of life in the Mesozoic era. Visited sporadically during the '30s and '40s, Tendaguru again became the site of scientific interest late in the 20th century. African Dinosaurs Unearthed tells the story of driven scientific adventurers working under difficult conditions and often paying the price with their health-and sometimes with their lives. Set against the background of a troubled century, the book reveals how scientific endeavors were carried on through war and political turmoil, and continue into the present day.

"The volume will certainly be the standard reference on the history of Tendaguru from here on... I thoroughly enjoyed African Dinosaurs Unearthed and recommend it to anyone interested in the history of research on Mesozoic fauna."

Gerhard Maier has spent ten years working in archaeology and vertebrate paleontology. Formerly a technician at the Royal Tyrrell Museum of Palaeontology, he now works as a data analyst for a major oil company. A lifelong interest in dinosaurs, travel, and history has culminated in this volume.

GOR006939532
African Dinosaurs Unearthed: The Tendaguru Expeditions by Gerhard Maier
Gerhard Maier
Life of the Past
Used - Very Good
Hardback
Indiana University Press
2003-07-02
432
0253342147
9780253342140
N/A
Book picture is for illustrative purposes only, actual binding, cover or edition may vary.
This is a used book - there is no escaping the fact it has been read by someone else and it will show signs of wear and previous use. Overall we expect it to be in very good condition, but if you are not entirely satisfied please get in touch with us.