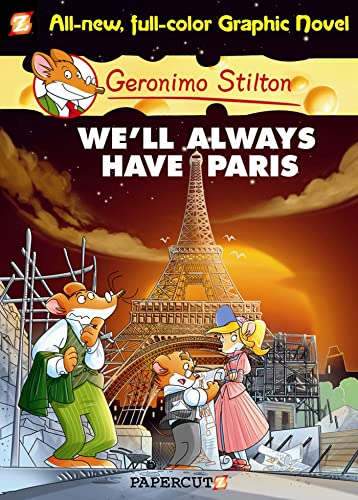 What's Geronimo to do in order to prevent the Pirate Cats from turning the almost-complete Eiffel Tower into a gigantic monument to Catardone's already monumental ego? No matter what the answer, this is a mission that will require the scientific expertise of Ampy Von Volt, as Geronimo takes to the skies in this new high-flying adventure set in late 19th-century Paris.

"GERONIMO STILTON is a hoot for those who love animals and adventure. The pace moves smoothly, the text is robust but not overwhelming, and the art is kid friendly and fun. What's not to like?" --THE GRAPHIC CLASSROOM

"Is it fact? Is it fiction? Neither. It's faction, and it's fun!" --SHELF-EMPLOYED

"Geronimo fans will eat this up quicker than a wheel of cheddar." --WASHINGTON TIMES

Born in New Mouse City, Mouse Island, Geronimo Stilton is Rattus Emeritus of Mousomorphic Literature and of Neo-Ratonic Comparative Philosophy. He is the director of The Rodent's Gazette, New Mouse City's most widely read daily newspaper.

Stilton was awarded the Ratitzer Prize for his scoops on The Curse of the Cheese Pyramid and The Search for Sunken Treasure. He has also received the Anderson 2001 Prize for Personality of the Year. One of his bestsellers won the 2002 eBook Award for world's best ratling electronic book. In 2006 he won the Nickelodeon Kids Choice Awards and in 2008 he won the Cartoomics prize 'Beyond Comics'. His works have been published all over the globe.

In his spare time, Mr. Stilton collects antique cheese rinds. But what he most enjoys is writing books where he tells his fabmouse adventures!