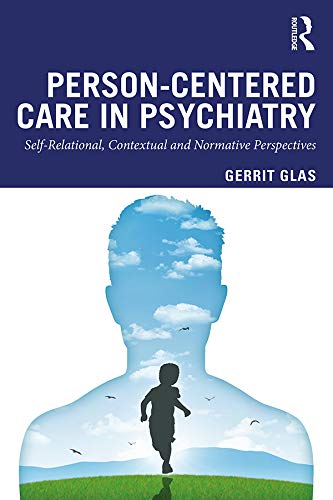 One of the paradoxes about psychiatry is that we have never known more about and better treated mental disorders, yet there exists so much unease about the practice of mental healthcare. Patients feel still stigmatized, psychiatrists are struggling with their roles in a rapidly changing system of healthcare, there is lack of consensus about what mental disorders are and what the focus of psychiatry should be. Person-Centred Care in Psychiatry: Self Relational, Contextual and Normative Perspectives offers a distinctive approach to two important linked conceptual issues in psychiatry: the relation between self, context, and psychopathology; and the intrinsic normativity of psychiatry as a practice.

Divided in two parts, this book shows how the clinical conception of psychopathology and psychiatry as normative practice are intrinsically connected, and how the normative practice model can be conceived as a natural extension of the analysis of the web of relations that sustain illness behaviour as well as professional role fulfilment.

Person-Centred Care in Psychiatry brings these topics together for the first time against the backdrop of unease about scientistic tendencies within psychiatry in an interconnected discussion that will be of interest to academics and professionals with an interest in the philosophy of psychology, psychiatry and mental health-care.

A product of many years of deliberation, scholarly conversation, and refinement, Glas' Person-Centered Care in Psychiatry is his vision of a psychiatry which is both scientifically and humanistically rigorous. Optimistic in temperament and outlook, Glas' work builds a psychiatry that is equally comfortable with molecules, brains, people, relationships, institutions, and societies. - John Z. Sadler, MD, The Daniel W. Foster, M.D. Professor of Medical Ethics, Professor of Psychiatry & Clinical Sciences, UT Southwestern, Dallas, TX

Gerrit Glas is a distinguished and well-known philosophical thinker who is also a practicing clinician. Philosophers working in the mental health research field are rarely equipped to say much of value about practice, and the practitioners who write are not often persuasive on the philosophical background, especially on complex issues to do with normativity, contextual influences and personhood. This makes Glas's work exceedingly rare and especially welcome. - Jennifer Radden, D.Phil. Oxon., Professor emerita of Philosophy, University of Massachusetts Boston

Gerrit Glas' synthesis of the Dutch philosopher Herman Dooyeweerd's work with the more familiar philosophical systems of Soeren Kierkegaard and Paul Ricoeur, brings a refreshingly original slant to contemporary debates about the role of science in person-centred psychiatry. - Professor Bill (K.W.M.) Fulford, Fellow of St Catherine's College and Director of the Collaborating Centre for Values-based Practice, University of Oxford

Gerrit Glas is a practicing psychiatrist and professor of philosophy at the Vrije Universiteit and the Amsterdam University Medical Centre. His main interest is in conceptual and normative issues at the intersection of psychiatry, philosophy, neuroscience, and society.

NGR9780367197391
9780367197391
0367197391
Person-Centred Care in Psychiatry: Self-Relational, Contextual and Normative Perspectives by Gerrit Glas
Gerrit Glas
New
Paperback
Taylor & Francis Ltd
20190819
220
N/A
Book picture is for illustrative purposes only, actual binding, cover or edition may vary.
This is a new book - be the first to read this copy. With untouched pages and a perfect binding, your brand new copy is ready to be opened for the first time
Trustpilot