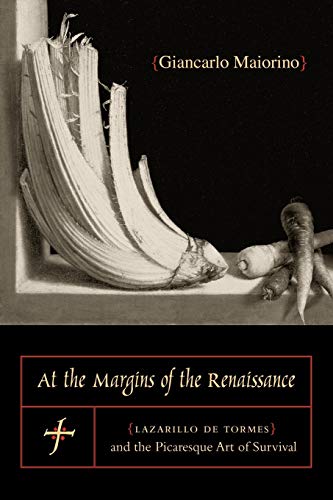 At the Margins of the Renaissance
by Giancarlo Maiorino

At the Margins of the Renaissance Summary

At the Margins of the Renaissance: Lazarillo de Tormes and the Picaresque Art of Survival by Giancarlo Maiorino

Published anonymously in 1554, Lazarillo de Tormes upset all the strict hierarchies that governed art and society during the Renaissance. It traces the adventures not of a nobleman or ancient hero, but rather of an ordinary man who struggles for survival in a cruel, corrupt society after growing up under the care of a blind beggar. Giancarlo Maiorino treats this picaresque narrative as a prism for exploring econopoetics, a term he uses to foreground the ways in which literary and economic modes of production feed off one another. His approach introduces readers to the turbulent world of common people of Renaissance Spain even as it affords abundant insights into the historical significance of this literary classic.

Although literary historians generally connect the rise of the novel to the needs of the middle classes of England, Maiorino demonstrates that its deepest roots are in the culture of indigence that developed at the peripheries of Renaissance society and challenged-even parodied-its authoritarian ambitions. Seen in this light, Lazarillo de Tormes emerges as a key text in understanding the novel's purchase on visions of escape from authority into alternative modes of existence.

Maiorino grounds his far-reaching arguments in recent theories of textuality and the practices of everyday life. His book will be important reading for all those concerned with the Renaissance, Spanish history and culture, and, more generally, theories of the novel.

At the Margins of the Renaissance Reviews

"This scholarship is clear, concise, pithy, and powerful."

"Giancarlo Maiorino's new book is an important, complex, and suggestive study that foregrounds the many contexts of the picaresque. . . . The book will become a standard reference for all students of picaresque narratives."

"Maiorino successfully shifts the discussion of Renaissance texts in particular and of literature in general from heroes of the upper or even the middle classes to the 'common people.' He accomplishes this by returning us to an early form of the novel and the prototype of picaresque fiction, the Lazarillo de Tormes, taking this early 'novel' as the starting point for a wide-ranging and stimulating discussion of various tropes and images that will lead toward a greater understanding of the ways in which aesthetic and socioeconomic factors figure in literary texts."

Giancarlo Maiorino is Rudy Professor Emeritus of Comparative Literature at Indiana University. He is the author of numerous books, including First Pages: A Poetics of Titles (Penn State, 2008).

Part I In the Belly of Indigence

1. Econopoetics and the Great Chain of Handouts

2. The Mousetrap: The Price of Staying Alive

3. Inconspicuous Consumption: Of Toothpicks and Leftovers

Part III Out of Laceria

4. The Water Carrier: From Subsistence to Prosperity

5. The Economic Culture of Toledan Provecho

Part IV The Price of Onomastics

7. Will Lazarus Ever Be a Wage Earner?

Part V Dividends of the Mind

8. The Cost of Education: A Tale of Two Cities

9. The Economy of Genre

10 At the Margins: Whose Renaissance?

GOR010392305
At the Margins of the Renaissance: Lazarillo de Tormes and the Picaresque Art of Survival by Giancarlo Maiorino
Giancarlo Maiorino
Studies in Romance Literatures
Used - Very Good
Paperback
Pennsylvania State University Press
2012-10-25
200
0271058463
9780271058467
N/A
Book picture is for illustrative purposes only, actual binding, cover or edition may vary.
This is a used book - there is no escaping the fact it has been read by someone else and it will show signs of wear and previous use. Overall we expect it to be in very good condition, but if you are not entirely satisfied please get in touch with us.