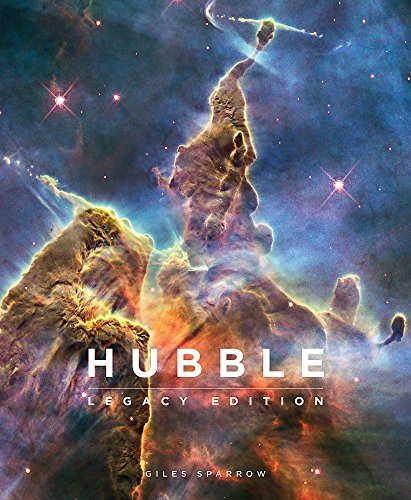 A fully updated pictorial retrospective of the Hubble Space Telescope.

Hubble: Window on the Universe by Giles Sparrow

For 20 years the Hubble Space Telescope has been hurtling around our planet at 17,500 mph sending spectacularly sharp images of the universe back to Earth, but after two decades and 570,000 photographs, NASA is preparing to wind down this extraordinarily successful mission.

This fully revised and updated edition of Hubble: Window on the Universe (Legacy Edition) showcases the very latest and clearest images of galaxies, nebulae, quasars, exploding stars and stellar nurseries. More than 200 remarkable cosmic images reveal the inner workings of the solar system, the expansion of the Universe, the birth and death of stars, the formation of planetary nebulae, the dynamics of galaxies and the mysterious force known as 'dark energy'.

Hubble is a celebration of this large and versatile telescope's astonishing scientific and technical achievements. Featuring the history of the project from its origins and launch in 1990, the discovery and emergency repair of a defective mirror, the impact of subsequent servicing missions and finally, its extraordinary legacy this stunning giant volume will take you on a journey through the universe via 200 glorious full-colour images.

Giles Sparrow studied Astronomy at University College London, and Science Communication at Imperial College, before embarking on a career in publishing. He has acted as author, consultant and contributor on numerous bestselling astronomy and popular science books for Quercus, including Cosmos, The Stargazer's Handbook and Hubble: Window on the Universe.
Introduction. Beginnings. Our Solar System in Perspective. Servicing Mission 1. Servicing Mission 2. A New View of the Stars. Servicing Mission 3a. Servicing Mission 3b. Looking Beyond the Milky Way. Servicing Mission 4. Exploring Space and Time. The Next Generation. HST Instrumentation & Glossary. Index.
GOR006564350
Hubble: Window on the Universe by Giles Sparrow
Giles Sparrow
Used - Very Good
Hardback
Quercus Publishing
2014-11-06
224
1848669658
9781848669659
N/A
Book picture is for illustrative purposes only, actual binding, cover or edition may vary.
This is a used book - there is no escaping the fact it has been read by someone else and it will show signs of wear and previous use. Overall we expect it to be in very good condition, but if you are not entirely satisfied please get in touch with us
Trustpilot