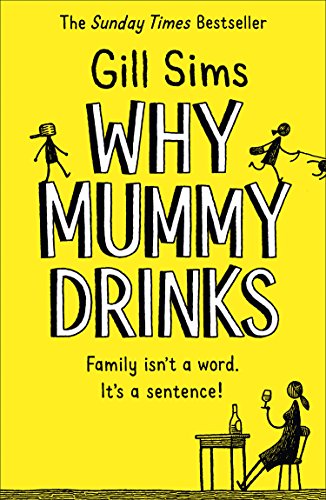 Why Mummy Drinks
by Gill Sims

Why Mummy Drinks by Gill Sims

Tuesday 8th September
First day back at school. I am going to 100% nail being a school mummy this year. I can totally do this. Yes, this year is definitely going to be much better - I am absolutely not going to shout at the children, let them stuff their faces with crisps or goggle away on the iPad. And I most certainly will not slump on the sofa at the end of the day, glugging wine and muttering `FML' repeatedly.

Unfortunately I have not yet actually managed to buy the bento boxes for their lunches or book jiu jitsu lessons, and I will have to learn to like green tea, as it is foul, and I have not yet mastered French plaits, but I am quietly confident that these are mere details in my grand master plan...

It is Mummy's 39th birthday. She is staring down the barrel of a future of people asking if she wants to come to their advanced yoga classes, and polite book clubs where everyone claims to be tiddly after a glass of Pinot Grigio and says things like `Oooh gosh, are you having another glass?'

But Mummy does not want to go quietly into that good night of women with sensible haircuts who `live for their children' and stand in the playground trying to trump each other with their offspring's extracurricular activities and achievements, and boasting about their latest holidays.

Instead, she clutches a large glass of wine, muttering `FML' over and over again. Until she remembers the gem of an idea she's had...

"Sim's latest offering is a hilarious follow-up to her bestselling debut... you'd be forgiven for thinking the blogger behind Peter and Jane couldn't pull it off twice - but she has" - The Sunday Post

Gill Sims is the author of the hugely successful parenting blog and Facebook site `Peter and Jane'. Why Mummy Drinks was the bestselling hardback fiction debut of 2017, spending over six months in the top ten of the Sunday Times Bestseller Charts, and was shortlisted for Debut Novel of the Year in the British Book Awards. Her second novel Why Mummy Swears spent seven weeks at number one in the Sunday Times Bestseller Charts, and 19 weeks in the top ten.