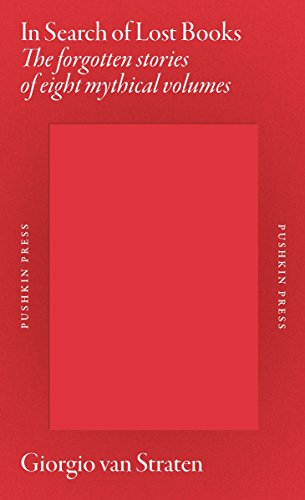 In Search of Lost Books
by Giorgio van Straten

In Search of Lost Books Summary

In Search of Lost Books: The forgotten stories of eight mythical volumes by Giorgio van Straten

This is a journey in search of the traces of eight legendary lost books. The clues are fragile, the hope of finding these pages scarce. Yet, maybe, somewhere, they still exist... They exist as a rumour or a fading memory. They vanished from history leaving scarcely a trace, lost to fire, censorship, theft, war or deliberate destruction, yet those who seek them are convinced they will find them. This is the story of one man's quest for eight mysterious lost books. Taking us from Florence to Regency London, the Russian Steppe to British Columbia, Giorgio van Straten unearths stories of infamy and tragedy, glimmers of hope and bitter twists of fate. There are, among others, the rediscovered masterpiece that he read but failed to save from destruction; the Hemingway novel that vanished in a suitcase at the Gare du Lyon; the memoirs of Lord Byron, burnt to avoid a scandal; the Magnum Opus of Bruno Schulz, disappeared along with its author in wartime Poland; the mythical Sylvia Plath novel that may one day become reality. As gripping as a detective novel, as moving as an elegy, this is the tale of a love affair with the impossible, of the things that slip away from us but which, sometimes, live again in the stories we tell.

In Search of Lost Books Reviews

- "Brilliant... a little masterpiece." - Ian Sansom, The Guardian Books of the Year


- "I read it all in a single, enchanted sitting." - Bookseller Editor's Choice


- "It's clear that Van Straten still searches for lost books, even as he recognises the futility of it. He likens the search to his childhood notions of the quest, to his longing to be "the hero who will be able to solve the mystery."" -- Guardian

- "There's real variety here. It's hard not to get chills, raise smiles and be surprised by the talent on offer. Consider it a teaser trailer for some of your new favourite authors." - Hits The Fan

- "Charming, curious little volume... van Straten winningly demonstrates how these books 'come back to life in us.'" -- Country Life

Giorgio van Straten is director of the Italian Cultural Institute of New York and one of the editors of the literature review Nuovi Argomenti. He is the author of several novels, including the prize-winning A Living Memory, along with two collections of short stories. He has translated the works of authors such as Kipling, London and Stevenson and has edited several works of non-fiction.

GOR008941739
In Search of Lost Books: The forgotten stories of eight mythical volumes by Giorgio van Straten
Giorgio van Straten
Used - Very Good
Hardback
Pushkin Press
2017-10-25
144
1782273727
9781782273721
N/A
Book picture is for illustrative purposes only, actual binding, cover or edition may vary.
This is a used book - there is no escaping the fact it has been read by someone else and it will show signs of wear and previous use. Overall we expect it to be in very good condition, but if you are not entirely satisfied please get in touch with us.