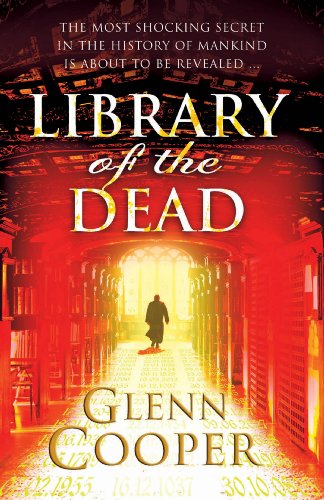 Library of the Dead
by Glenn Cooper

Out of Stock
$14.49
inc. GST
The most shocking secret in the history of mankind is about to be revealed ... A select few defend the secret of the library with their lives - and as Will closes in on the truth, they are determined to stop him, at any cost ...
Very Good
Only 0 left

Library of the Dead Summary

Library of the Dead by Glenn Cooper

The most shocking secret in the history of mankind is about to be revealed ... A murderer is on the loose on the streets of New York City: nicknamed the Doomsday Killer, he's claimed six victims in just two weeks, and the city is terrified. Even worse, the police are mystified: the victims have nothing in common, defying all profiling, and all that connects them is that each received a sick postcard in the mail before they died - a postcard that announced their date of death. In desperation, the FBI assigns the case to maverick agent Will Piper, once the most accomplished serial killing expert in the bureau's history, now on a dissolute spiral to retirement. Battling his own demons, Will is soon drawn back into a world he both loves and hates, determined to catch the killer whatever it takes. But his search takes him in a direction he could never have predicted, uncovering a shocking secret that has been closely guarded for centuries. A secret that once lay buried in an underground library beneath an 8th Century monastery, but which has now been unearthed - with deadly consequences. A select few defend the secret of the library with their lives - and as Will closes in on the truth, they are determined to stop him, at any cost ...

Library of the Dead Reviews

"A serial killer, religious conspiracy thriller with a fabulous paperback original package. It is my tip for the biggest debut of the year" -- Jonathan Ruppin * Bookseller *
"Extremely well-written, imaginative and captivating" * Eurocrime.com *
"Prepare to be enthralled by this epic thriller. Glenn Cooper's debut novel is a masterpiece of suspense. Eat your heart out Dan Brown" * Peterborough Evening Telegraph *
"In this year of the Second Coming of Dan Brown, it is going to take a book with a singular quality to try and match it in sales at the airport. And this might have the strongest chance of challenging Brown" * www.thebookbag.co.uk *
"Marks the debut of a startling new talent. Here is a story both incandescent and explosive. A seamless blend of modern-day thriller and historical mystery with an ending that left me breathless. A debut not to be missed" -- James Rollins, Bestselling Author of The Last Oracle and The Judas Strain

Glenn Cooper graduated with a degree in archaeology from Harvard and got his medical degree from Tufts University School of Medicine. He has been the Chairman and CEO of a biotechnology company in Massachusetts. He is also a screenwriter and producer - his first feature film, produced by his production company, Lascaux Pictures, was sold at the Tribeca Film Festival for distribution in the US and thirty countries. Library of the Dead is his first novel.

GOR000996398
Library of the Dead by Glenn Cooper
Glenn Cooper
Used - Very Good
Paperback
Cornerstone
2009-05-21
416
0099534452
9780099534457
N/A
Book picture is for illustrative purposes only, actual binding, cover or edition may vary.
This is a used book - there is no escaping the fact it has been read by someone else and it will show signs of wear and previous use. Overall we expect it to be in very good condition, but if you are not entirely satisfied please get in touch with us.