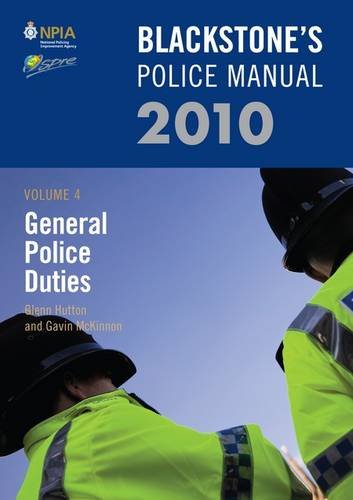 Blackstone's Police Manuals are the leading police reference texts in the UK. In addition to being the only offical study guides for the police promotion examinations in England and Wales, and a recognised text for student police officers, the manuals have quickly established themselves as the definitive reference sources for all who have involvement with police law and procedure. The manuals have been written in consultation with police forces across England and Wales, and are endorsed by the National Policing Improvement Agency, for OSPRE Part 1 Promotion Examinations. Blackstone's Police Manual Volume 4: General Police Duties 2010 covers all aspects of police duties from a police officer's perspective. It has been fully updated for 2010 to incorporate all recent legislative developments including the Police (Conduct) Regulations 2008, the Criminal Justice and Immigration Act 2008, the Police and Justice Act 2006, the Violent Crime Reduction Act 2006, the Counter-Terrorism Act 2008, , the Police (Performance) Regulations 2008, and updates to the PACE Codes of Practice. The Manuals continue to be the most accessible, relevant, and focussed revision materials for Promotion Examinations. They are widely used in the professional development of police officers in a variety of roles making them essential reading for anyone with an interest in police and criminal law. Whether you are a serving police officer or police trainer, a practitioner, advisor, or researcher, Blackstone's Police Manuals 2010 are an essential purchase. The other three titles in the series are: Volume 1: Crime 2010, Volume 2: Evidence and Procedure 2010, Volume 3: Road Policing 2010.

Glenn Hutton BA, MPhil, FCIPD is a Director of Psychometric Technology Limited which designs and publishes psychological tests and provides selection and assessment services. Formerly a Superintendent in North Yorkshire Police, he also worked as Head of NPT Examinations and Assessment, Head of Training in North Yorkshire and as both Course Director and Director of Studies at the Police Staff College, Bramshill.
Gavin McKinnon LLB, LLM, MSc, MCIPR is Chief Superintendent and Director of Corporate and Public Affairs at the National Policing Improvement Agency with responsibility for marketing and communications, legal services, corporate governance, policy, and equality and diversity. He was formerly an officer in the RUC/PSNI, and Deputy Director of the Home Office Police Reform Unit.

GOR002732789
General Police Duties: v. 4 by Glenn Hutton
Glenn Hutton
Blackstone's Police Manuals
Used - Very Good
Paperback
Oxford University Press
2009-08-20
560
0199576041
9780199576043
N/A
Book picture is for illustrative purposes only, actual binding, cover or edition may vary.
This is a used book - there is no escaping the fact it has been read by someone else and it will show signs of wear and previous use. Overall we expect it to be in very good condition, but if you are not entirely satisfied please get in touch with us.