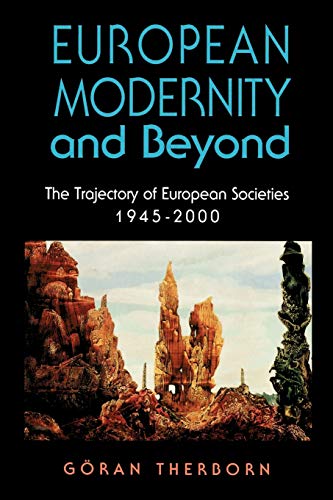 European Modernity and Beyond
by Goran Therborn

Out of Stock
$17.49
inc. GST
To what extent is the period 1945-2000 producing fundamental change and what are the areas of continuity? Have the societies of Europe become more similar to others on the globe or more distinctively European? What are the prospects of Europe after decades of postwar change and the end of the Cold War? This title addresses these questions.
Good
Only 0 left

European Modernity and Beyond Summary

European Modernity and Beyond: The Trajectory of European Societies, 1945-2000 by Goran Therborn

In this book one of Europe's foremost sociologists offers a profound and accessible overview of the trajectory of European societies, East and West, since the end of World War II.

Combining theoretical depth with factual analysis, Goeran Therborn addresses the questions that underpin an understanding of the nature of European modernity, including: To what extent is the period 1945-2000 producing fundamental change and what are the areas of continuity? Have the societies of Europe become more similar to others on the globe or more distinctively European? What are the prospects of Europe after decades of postwar change and the end of the Cold War?

Issues covered include the division of paid and unpaid labour, patterns of rights in different social spheres, the development of mass consumption, the evolution of risks, the spatial range of economic and cultural change, collective memory and identities, the geography of happiness, and modes of collective action. The author relates these issues to the two great social steering projects of the period - socialism in the East and the European Union in the West.

European Modernity and Beyond Reviews

`There is a dearth of serious, analytical informed sociological accounts of the significance of modern Europe. Yet there is a wealth of data available and a core theoretical tradition of historical sociology and comparative analysis. Therborn's book is an impressive marriage of painstakingly collected and superbly organised information with directing theory. He calls it "sociological history" and says it is aimed at a generally interested public. It is this and much more. It is a highly accessible compendium of current sociological data about a wide range of European (east and west) social structural and cultural organisation and behaviour and a clear account of the directions of European social change within an unfinished project of modernity.... The reach is very ambitious. The macro-sociological grasp is impressive within the bounds of a single volume.... The book does not have a thesis or a big idea. Indeed this is explicitly disavowed by Therborn. But it is a remarkably focused, precise and extensive treatment of a huge topic. As a useful teaching text it has, to my knowledge, no rival. Its coverage and comparison of issues and societies both eastern and western, its enormously usable collection of data (74 tables), its Europe-wide contextualisation of the substantial issues important in contemporary empirical sociology and, lest this sound too sombre, the clarity and frequent vividness of its writing and its reasoned political hopefulness make it a most significant book in this area' - Sociology

`Therborn's concern in this stimulating and highly ambitious work is nothing less than to take stock of European modernity in the period since the Second World War. How has it related to its traditions of Enlightenment and citizenship? What have been the basic patterns of development, economic, social, cultural and political? Where does Europe fit now, in a world where there are not simply different routes to modernity but different conceptions of the end-point, `alternative modernities'? The strength of this book is that Therborn does not address these questions mainly speculatively but historically and empirically. In this he has achieved an astonishing feat of compression. Nowhere else can one find, within the compass of one volume, such an array of statistics and researching findings... It is difficult to imagine anyone other than Therborn who might have attempted this gigantic task of comprehension and compression. He has also given us many glimpses of his enterprises... One has the distinct impression, too, that this is only the first of a series of syntheses covering the European story in the second half of the twentieth century. If so, there is much to look forward to. Meanwhile what we have here is a splendid achievement, and a godsend to hard-pressed students and teachers of courses on contemporary European politics and society' - Political Studies

`Goeran Therborn's trajectory of European societies is a masterful work of erudition and a synthesis of recent social theories grounded on empirical evidence. Written at the cross-road of sociology, political science and social history, this cross-national comparison deserves to be required reading for senior students on both sides of the Atlantic' - Professor Mattei Dogan, Director, CNRS, Paris

Goeran Therborn is Professor of Sociology at the University of Goeteborg, Sweden. His previous books include The Ideology of Power and the Power of Ideology (1980), Why Some Peoples are More Unemployed than Others (1986) and Can the Welfare State Compete? (with A. Pfaller & L. Gough, 1991). He is a former President of the Nordic Sociological Association.

GOR007215015
European Modernity and Beyond: The Trajectory of European Societies, 1945-2000 by Goran Therborn
Goran Therborn
Used - Good
Paperback
SAGE Publications Ltd
1995-03-06
416
0803989350
9780803989351
N/A
Book picture is for illustrative purposes only, actual binding, cover or edition may vary.
The book has been read but remains in clean condition. All pages are intact and the cover is intact. Some minor wear to the spine.