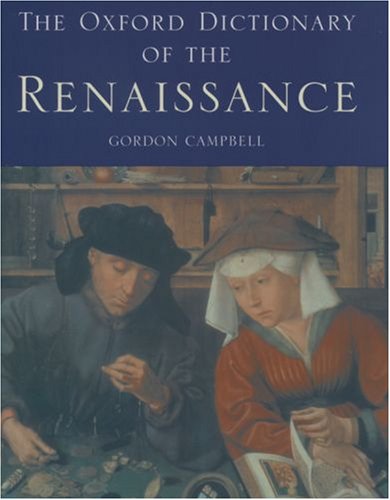 The Oxford Dictionary of the Renaissance
by Gordon Campbell

Out of Stock
$124.99
inc. GST
Surveys the aspects of the Renaissance in Europe beginning in 1415 and ending at 1618. This work contains about 4,000 A-Z entries, which cover a spectrum of topics from art to philosophy, from religion to economics. It covers a geographical area including all of modern Europe and Eastern Europe.
Very Good
Only 0 left

The Oxford Dictionary of the Renaissance Summary

The Oxford Dictionary of the Renaissance by Gordon Campbell

The word 'renaissance', French for 'rebirth', perfectly describes the intellectual and cultural revival experienced in Europe, starting early in the 14th century and ending early in the 17th century. The Renaissance was a period of intense activity, the fruits of which have had a profound impact on the intellectual history and culture of the whole of Europe and the wider world. Even in the Europe of today there is still much evidence of the enduring influence of the Renaissance - in thought and society as well as in art, architecture, literature, and science. Gordon Campbell, himself the epitome of the Renaissance man, with the help of his team of distinguished consultant and advisory editors, has created a unique new A-Z reference surveying all aspects of the Renaissance in Europe beginning in 1415 and ending at 1618. These dates were not chosen arbitrarily: as well as the year of the battle of Agincourt, 1415 was the year in which Jan Hus was burnt at the stake, his reforming zeal becoming a signal which was to shape the course of European affairs for centuries; 1618 marked the onset of the Thirty Years War, a conflict which sparked yet another new direction for European history. There are about 4,000 A-Z entries in the text, ranging in length from the very short and concise to the longer and more detailed. These entries cover a wide spectrum of topics from art to philosophy, from religion to economics. Over half of the entries are biographical, covering figures from artists, architects, and mystics to philosophers, explorers, and royalty. The text covers a wide geographical area including all of modern Europe (plus Eastern Europe) except for areas occupied by the Ottomans. The book will be highly illustrated with 100 black-and-white integrated pictures. The main text is also supplemented with four appendices and a thematic index, and is available in print and as an e-reference text from "Oxford's Digital Reference Shelf".

The Oxford Dictionary of the Renaissance Reviews

'Campbell's phenomenal achievement' is 'a mighty new reference work' and 'a major scholarly achievement'. Bulletin of the Society for Renaissance Studies 'Campbell has written this dictionary with three audiences in mind: the academic specialist, the student, and the general reader. All three will find much to value in this highly recommended work'. The Library Journal The book is a tour de force...the contents reflect an astonishing breadth of interests and competencies...again and again, topics that are either unexpected or far from the beaten track come to life in cogent, crystalline and instructive summaries. Times Literary Supplement

Gordon Campbell is Professor of Renaissance Literature at the University of Leicester. He was the founding editor of Renaissance Studies and is now the general editor of Review of English Studies. In addition to editing the publications detailed below, Gordon Campbell has also edited four plays by Ben Jonson and was co-editor and translator of Edward King, Milton's 'Lycidas'. He has served as chairman of the Society for Renaissance Studies and President of the English Association, of which he is a director. He has been awarded a D.Litt by the University of York and an honorary doctorate by the University of Bucharest; he is also a fellow of the Royal Historical Society, a corresponding fellow of South African Society for Medieval and Renaissance Studies, and a member of the advisory board of the Sociedad Espanola de Estudios Renacentistas Ingleses.
"

GOR010256502
The Oxford Dictionary of the Renaissance by Gordon Campbell
Gordon Campbell
Used - Very Good
Hardback
Oxford University Press
2003-03-27
912
0198601751
9780198601753
N/A
Book picture is for illustrative purposes only, actual binding, cover or edition may vary.
This is a used book - there is no escaping the fact it has been read by someone else and it will show signs of wear and previous use. Overall we expect it to be in very good condition, but if you are not entirely satisfied please get in touch with us.