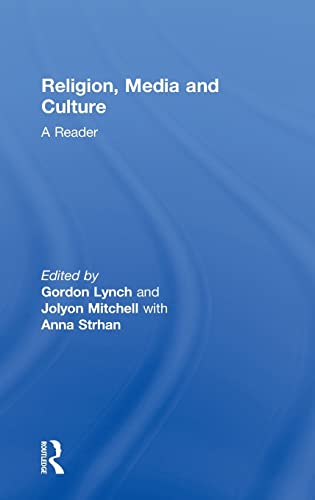 Religion, Media and Culture: A Reader
by Gordon Lynch

Religion, Media and Culture: A Reader by Gordon Lynch

This Reader brings together a selection of key writings to explore the relationship between religion, media and cultures of everyday life. It provides an overview of the main debates and developments in this growing field, focusing on four major themes:

This collection is an invaluable resource for students, academics and researchers wanting a deeper understanding of religion and contemporary culture.

"The ability to separate religion from media from culture is becoming more dubious by the day. This collection of essays allows readers to relish the complexities and discover threads that lead in brand new directions to help us rethink religion, media, and culture. The editors have assembled a needed tool for classroom use, provoking questions, but also supplying the critical means to think through contemporary cultural engagements."

- S. Brent Plate, managing editor of Material Religion, author of Religion and Film: Cinema and the Re-Creation of the World

"As a whole, the volume...provides a good mixture of original and previously published work...[It] is organized around a set of highly relevant themes, and provides a useful andaccessible resource for courses and teaching on religion, media and culture."

GOR010314869
Religion, Media and Culture: A Reader by Gordon Lynch
Gordon Lynch
Used - Very Good
Hardback
Taylor & Francis Ltd
2011-08-10
284
041554954X
9780415549547
N/A
Book picture is for illustrative purposes only, actual binding, cover or edition may vary.
This is a used book - there is no escaping the fact it has been read by someone else and it will show signs of wear and previous use. Overall we expect it to be in very good condition, but if you are not entirely satisfied please get in touch with us.