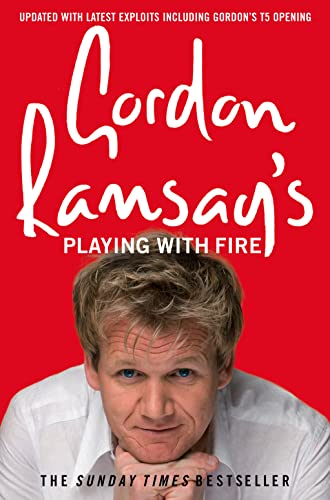 The bestselling follow-up to Humble Pie, now in paperback. When he was struggling to get his first restaurant in the black, Gordon Ramsay never imagined he'd be famous for a TV show about how to run profitable eateries, or that he'd be head of a business empire. But he is and he did. Here's how.

The bestselling follow-up to Humble Pie, now in paperback. When he was struggling to get his first restaurant in the black, Gordon Ramsay never imagined he'd be famous for a TV show about how to run profitable eateries, or that he'd be head of a business empire. But he is and he did. Here's how.

"In the beginning there was nothing.

Not a sausage - penniless, broke, fucking nothing - and although, at a certain age, that didn't matter hugely, there came a time when hand-me-downs, cast-offs and football boots of odd sizes all pointed to a problem that seemed to have afflicted me, my mum, my sisters, Ronnie and the whole lot of us. It was as though we had been dealt the `all-time dysfunctional' poker hand.

I wish I could say that, from this point on, the penny dropped and I decided to do something about it, but it wasn't like that. It would take years before the lessons of life, business and money began to click into place - before, as they say, I had a pot to piss in.

This is the story of how those lessons were learned."

This is Gordon Ramsay at his raw, rugged best. PLAYING WITH FIRE is the amazing story of Gordon's journey from sous-chef to superstar. In his no-holds-barred style, Gordon shares his passion for risk and adventure and his hard-won success secrets.

'A truly inspiring read that makes you realise if you want something enough, it's there for the taking.' The Sun

`Gordon Ramsay's Humble Pie - so exuberantly angry boastful, cliche-ridden, expletive-laden and touchingly sincere that I can't believe that a single sentence has been written by anyone but the failed footballer, great cook, telly star and businessman himself. He's the genuine bollocks, as he's so fond of saying, and this is the tale of his personal class struggle.' - The Observer

`I cannot recommend strongly enough that every BII member reads it... The book is an inspiration. Anybody running any kind of business will benefit from reading this.' BII Business magazine

Gordon Ramsay has launched a string of internationally celebrated restaurants in London with ten Michelin stars between them, with his stable of highly talented chefs, and has restaurants in Dubai, Tokyo, New York and Florida, with more planned.

The author of nine best-selling cookery books and an autobiography, Humble Pie, Gordon is one of the biggest television personalities in the UK with his hit shows, Ramsay's Kitchen Nightmares, Hell's Kitchen and The F Word.

GOR000763804
Gordon Ramsay's Playing with Fire by Gordon Ramsay
Gordon Ramsay
Used - Very Good
Paperback
HarperCollins Publishers
2008-05-03
304
0007259883
9780007259885
N/A
Book picture is for illustrative purposes only, actual binding, cover or edition may vary.
This is a used book - there is no escaping the fact it has been read by someone else and it will show signs of wear and previous use. Overall we expect it to be in very good condition, but if you are not entirely satisfied please get in touch with us.