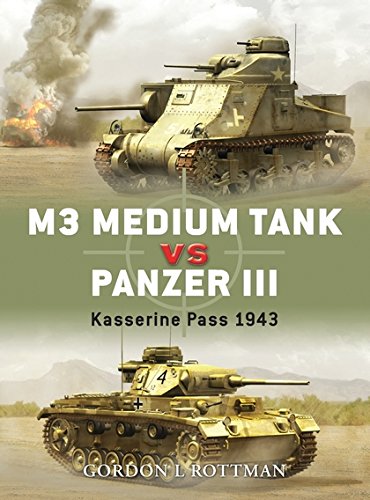 ...the first-person perspectives offered by Kirby and Koehler put this book on my recommended books list. These personal experiences definitely stirred some interest for me to research more on the design, evolution, and field performance of each of the two tanks.- C. Peter Chen, World War II Database (July 2008)

Smarting from their defeat at El Alamein and with directives to save the North African campaign, Rommel's battle-hardened armored divisions confronted a fresh opponent in the form of the newly arrived Americans. This would be a duel between the stalwart of the Wehrmacht armored divisions - the Panzerkampfwagen III - and the American's as yet untested first armored division. In reality both would prove unequal to the task as they floundered amidst the rugged hills and ravines of the Tunisian landscape. This book charts the design and development of these two disparate rivals - their vastly different armament and armor as well as their tactical concepts. Mutually hampered by the climate, terrain, and lack of experience, this was a desperate struggle for supremacy. Moreover, it was a duel with far-reaching implications. For the Americans it was their first baptism of fire and the outcome would determine their future war strategy. For the Germans, this was the final throw of the dice to regain the overwhelming superiority they had enjoyed during the first years of the war. Analyzing the strengths and weaknesses of these two deadly opponents, this book explores the successes and failures of the Grant and Panzer III as they clashed at the critical battles of North Africa. Moreover it is an insight into the lives of the tank crews themselves as they struggled with the twin horrors of tank warfare and the fight for survival amidst some of the most inhospitable terrain on earth.

"This book tells the remarkable story chronologically, covers design & development, the strategic situation, technical specifications, gunnery, small unit tactical and maintenance along with the effect of the climate on tank crews, a brief combat description of the fighting at Kasserine...statistics and analysis and an Aftermath/Conclusion." --Howie Belkin, International Plastic Modellers' Society (July 2008).

"The book then goes on to detail this initial major combat between the two forces, following up with an analysis of the event and what came afterwards. All of this is superbly illustrated with maps, cutaways, and period photographs, making this edition a must-have for those interested in the combat capabilities of these two machines." --Scott Van Aken, modelingmadness.com (May 2008)

Gordon L Rottman entered the US Army in 1967, volunteered for Special Forces and trained as a weapons specialist. He served in the 5th Special Forces Group in Vietnam in 1969-70 and in airborne infantry, patrol and intelligence. He was a special operations forces scenario writer at the Joint Readiness Training Center for 12 years and is now a freelance writer. The author lives in Cypress, Texas.

Ian Palmer is a highly experienced digital artist. A graduate in 3D design, he currently works as a senior artist for a leading UK games developer. Besides his artistic interests he is also a keen musician and motorcyclist. He lives in West London with his wife and three cats.

Born in Faenza in 1963, and from an early age taking an interest in all things military, Giuseppe Rava has established himself as a leading military history artist. Entirely self-taught, Giuseppe is inspired by the works of the great military artists, such as Detaille, Meissonier, Rochling, Lady Butler, Ottenfeld and Angus McBride. He lives and works in Italy.

GOR005381830
M3 Medium Tank Vs Panzer III: Kasserine Pass, 1943: Kasserine Pass, 1943 by Gordon Rottman
Gordon Rottman
Duel
Used - Very Good
Paperback
Bloomsbury Publishing PLC
2008-05-07
80
184603261X
9781846032615
N/A
Book picture is for illustrative purposes only, actual binding, cover or edition may vary.
This is a used book - there is no escaping the fact it has been read by someone else and it will show signs of wear and previous use. Overall we expect it to be in very good condition, but if you are not entirely satisfied please get in touch with us.