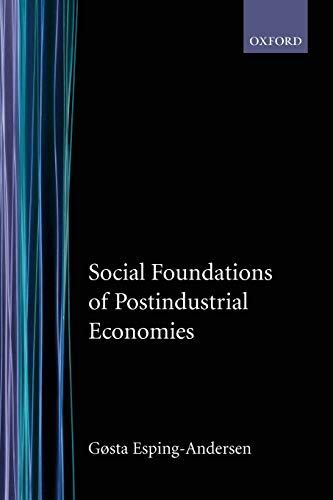 In Stock
$30.99
+10% GST
The Golden Age of postwar capitalism has been eclipsed, and with it seemingly also the possibility of harmonizing equality and welfare with efficiency and jobs. In his first major book since The Three Worlds of Welfare Capitalism, Europe's leading analyst of the welfare state presents a provocative examination of postindustrial economies at the end of the twentieth century.
Very Good
Only 1 left

The Golden Age of postwar capitalism has been eclipsed, and with it seemingly also the possibility of harmonizing equality and welfare with efficiency and jobs. Most analyses believe the the emerging postindustrial society is overdetermined by massive, convergent forces, such as tertiarization, new technologies, or globalization, all conspiring to make welfare states unsustainable in the future. Social Foundations of Postindustrial Economies takes a second, more sociological and more institutional, look at the driving forces of economic transformation. What, as a result, stands out is postindustrial diversity, not convergence. Macroscopic, global trends are undoubtedly powerful, yet their influence is easily rivalled by domestic institutional traditions, by the kind of welfare regime that, some generations ago, was put in place. It is, however, especially the family economy that hold the key as to what kind of postindustrial model will emerge, and to how evolving tradeoffs will be managed. Twentieth-century economic analysis depended on a set of sociological assumptions that, now, are invalid. Hence, to better grasp what drives today's economy, we must begin with its social foundations.

Once again, Esping-Andersen has laid out for us an ambitious academic and political agenda. This book will certainly be of interest to the community of comparative welfare regime analysts, but should be read as well by analysts of U.S. welfare reform, for it reveals that many of the policy changes these scholars are charting are not confined to America. * Ann Shola Orloff, American Journal of Sociology *
provocative and informative * Ann Shola Orloff, American Journal of Sociology *
Esping-Andersen's new work shows the significant scholarly payoff from the sustained conversations that have come to characterize comparative welfare regime analysis, including those between feminists and others. His revised regime analysis highlights new material on household economies * Ann Shola Orloff, American Journal of Sociology *
Goesta Esping-Andersen's rich new book analyzes the roots of the crises of today's welfare regimes * Ann Shola Orloff, American Journal of Sociology *
clear and absorbing writing * Norman Ginsburg, Global Social Policy 1(1) *
adds significantly to a more realistic understanding of contemporary welfare regimes by probing deeper into their "institutional fine grain". Social Foundations is essentially a timely addition to the views presented in The Three Worlds, centred around a new, persuasive, emphasis on the role of the household as a defining element driving postindustrial economies. * Government and Oppostion *
this book impressively integrates detailed empirical analysis of the manifold aspects of the work-family-welfare nexus within a coherent synthetic framework. In this, the author again displays virtually unrivalled skill amidst current research * Government and Opposition *
The book provides a wealth of interesting statistical information and analysis. * Andrew Sayer, Progress in Human Geography 24,3. *
well worth reading as a highly informative analysis of the diversity of the social foundations of postindustrial economies. * Andrew Sayer, Progress in Human Geography 24,3. *

Gosta Esping-Andersen is Professor of Comparative Social Systems at the University of Trento, Italy

GOR002819861
Social Foundations of Postindustrial Economies by Gosta Esping-Andersen
Gosta Esping-Andersen
Used - Very Good
Paperback
Oxford University Press
1998-02-01
218
0198742002
9780198742005
N/A
Book picture is for illustrative purposes only, actual binding, cover or edition may vary.
This is a used book - there is no escaping the fact it has been read by someone else and it will show signs of wear and previous use. Overall we expect it to be in very good condition, but if you are not entirely satisfied please get in touch with us.