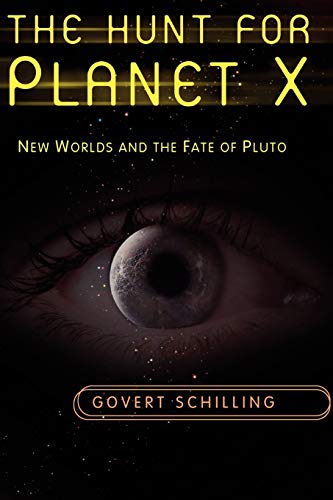 The Hunt for Planet X by Govert Schilling

Ever since the serendipitous discovery of planet Uranus in 1871, astronomers have been hunting for new worlds in the outer regions of our solar system.

The Hunt for Planet X: New Worlds and the Fate of Pluto by Govert Schilling

Ever since the serendipitous discovery of planet Uranus in 1871, astronomers have been hunting for new worlds in the outer regions of our solar system. This exciting and ongoing quest culminated recently in the discovery of hundreds of ice dwarfs in the Kuiper belt, robbed Pluto from its 'planet' status, and led to a better understanding of the origin of the solar system.

This timely book reads like a scientific 'who done it', going from the heights of discovery to the depths of disappointment in the hunt for 'Planet X'. Based on many personal interviews with astronomers, the well-known science writer Govert Schilling introduces the heroes in the race to be the first in finding another world, bigger than Pluto.

"The Hunt for Planet X is a fascinating tale by one of the world's premier astronomy writers. Govert Schilling is not only scrupulously accurate, he writes beautifully as well." (Stephen P. Maran, Author of Astronomy for Dummies and Press Officer, American Astronomical Society)

"The Hunt for Planet X is an adventure story or, more accurately, a series of adventure stories. Schilling tells them well, capturing both the science and the people involved. It starts with the classics: Uranus, Neptune and Pluto; and moves all over the solar system as ground-based astronomers and space scientists pour over measurements and observations to try to understand the worlds around us. Current debates about the Pioneer Anomaly and the definition of what is a planet make the book current as well as a good history." (Dr. Louis Friedman, Executive Director, The Planetary Society)

"This exciting tale of the centuries-old search for new planets in the solar system reads like a thriller. It is an adventure packed with fierce competition, brilliant discoveries, dumb errors, lucky coincidences and artful intrigue - in short, the full spectrum of the human drama. The story reaches an exciting climax in 2006, when we lost Pluto as a planet but gained a number of ice dwarfs in return. This colorful account chock-full of fascinating details is an excellent metaphor for the great adventure of science." (Robbert Dijkgraaf, Professor of Mathematical Physics at the University of Amsterdam)

"The story of the discovery of Pluto and its fellow Kuiper belt objects is told here by science writer and New Scientist contributor Govert Schilling. He travelled the world to interview all the surviving protagonists, including Venetia Burney - the 11-year-old who suggested the name Pluto - and the band of dogged planet hunters who have found such bodies as Eris, Easter Bunny, Buffy and Santa (with its moons Rudolph and Blixen). And the search for Planet X is still on... This is a wonderfully entertaining book which conveys the raw excitement of a fast-developing field. I can't wait to find what else is out there." (Marcus Chown, New Scientist, 28 January 2009)

"Schilling's journey takes readers on a wild ride through teh solar system, skillfully shedding light on various fascinating subjects along the way. He handily explains techniques, planetary anomalies and discovery histories in a style that will be easily digestible for non-scientists... Schilling also presents fascinating insights into the characters of astronomers who have explored the solar system, from the prickly personalities of some of the brightest stars -- like Gerard Kuiper, for whom Pluto's neighborhood is named -- to the sweetness of now-famous astronomers as young children, who stared at the stars and dreamed of being astronauts... All in all, The Hunt for Planet X is a delightful detective story that presents the history of solar system research -- including the most recent, and explosive developments -- in a meaningful and colorful way..." (Anne Minard, author of Pluto and Beyond, Arizona Daily Sun, 08 February 2009)

"In an interesting and understandable format, Schilling adeptly relays information that could conceivably sail as far over the average reader's head as the moon. Each chapter is a stand-alone essay; arranged along a chronological time frame, they combine to tell the story of celestial discoveries in short, entertaining bites... If you like astronomy, and people, and good story telling, this book hits the trifecta." (Ruth Douillette, The Internet Review of Books, March 2009)

"This is one of the most detailed books about the Solar System, its history, and the neighborhood at and around our Sun. ... The book is very well illustrated throughout, with some wonderful pictures ... . anyone really interested in Pluto and in understanding our Solar System in general, this book contains all the latest, up-to-date scientific information ... . Overall, to anyone interested in learning about ... our Solar System and the stories of their discovery, The Hunt For Planet X is for you." (Starts With a Bang, March, 2009)

"It is a book about how our solar system came to be, how astronomers and planetary scientists go about discovering the next new planet. ... Overall ... Govert Schilling did a great job of bringing the solar system to the masses in well written easy to understand shorts packed full of adventure and intrigue." (Bob Johnson, Blackholes and Astrostuff, March, 2009)

"Schilling covers everything from the days when planets, moons, and other galactic objects were first discovered ... . The Hunt For Planet X is a great resource for any ... person looking for answers about our solar system, what exactly people are looking for up there in the great blackness of space, and how they're finding it. It is an invaluable reference for those wanting either quick answer or long discussions on the mysteries of space." (Alex Telander, BookLoons, April, 2009)

"Govert Schilling's new book ... tell the story of the Solar System's outermost bodies. ... Accessible to beginners, friendly to non-scientists and rewarding to those with an astronomical background, if there is one book that you read about the outer reaches of the Solar System ... it is this one." (Keith Cooper, Astronomy Now, April, 2009)

"The book not only gives the history of the exploration of the outer solar system, but it includes vignettes of Schilling's visits to almost all of the astronomers currently active in the field. ... finally I have a book to hand people not just when they ask about Pluto, but when they ask me whether or not I think the world is going to end in 2012 because of a close encounter with the rouge planet." (Mike Brown's Planets, July, 2009)

"The book covers the history of discovery in the Solar System from Uranus up to very recent years. ... is well illustrated in colour, with pictures located in the relevant sections of the text. At the end is a helpful table with data on large ice dwarfs. I found it particularly useful to correlate the official IAU names with some of the jocular names given by astronomers to their discoveries. ... a good introduction to the history of Solar System discovery, particularly in recent years." (Mark Hurn, The Observatory, Vol. 129 (1211), August, 2009)

"Each lively chapter begins with a focus on an individual, often revealing something of his/her personal life as well as the scientific quest. ... The illustrations are excellent, as is the translation from the original Dutch. A chronology of discoveries and a glossary are nice additions to a book that provides clear explanations for the science involved, as well as an enjoyable reading experience. Summing Up: Highly recommended. General readers and interested lower- and upper-division undergraduates." (M.-K. Hemenway, Choice, Vol. 46 (10), June, 2009)