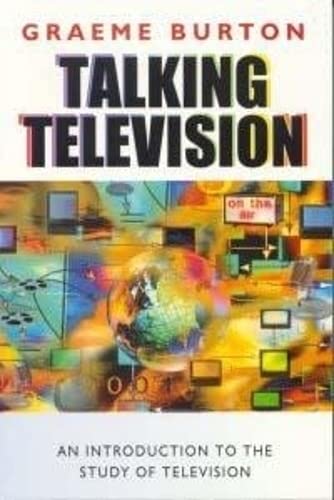 The study of television is central to media, communication and cultural courses. This textbook introduces students to three approaches to television study: culturalist, postmodernist and gender perspectives, explaining concepts such as ideology, institution and audience. It includes chapters on news, realism and representation.

Talking Television: An Introduction to the Study of Television by Graeme Burton

The study of television is central to media, communication and cultural courses. This new textbook by the author of 'More Than Meets the Eye' introduces students to three main approaches to television study: culturalist, postmodernist and gender perspectives, explaining challenging concepts such as ideology, institution and audience with plenty of concrete examples and illustrations.

Important - and entertaining - TV genres such as crime drama and docusoaps are discussed, with separate chapters on news, realism and representation. The relationship between institution and audience, views on TV effects and theories of how meanings are constructed for and by the audience, are explored in the light of current research. A chapter on television history is included, and the book ends with a vision of the future of television, driven by the impact of globalization as well as advances in technology.

Critical debates and concepts are woven throughout the text, illustrated by diagrams and shots taken from a variety of programmes. This book will be core reading for students seeking information about the medium of television combined with thorough critical understanding.

It provides an accessible guide to the critical debates that are being had with regard to the one-eyed hypnotist, covering all the necessary bases, including the regulation of television, its genres, ideologies and effects. The book will be of most use to lecturers teaching A level media studies. * The Lecturer *
Graeme Burton is Lecturer in Media Studies at the University of Teeside, UK.
What do you mean - television studies? Critical approaches to television studies Institutions and power: the British television industries Television product: points of control Television, narrative and form Television news Television & realism Television and representations Audiences, meanings, effects British television: regulation, censorship and constraints Television history Television futures.
GOR002677596
9780340589649
0340589647
Talking Television: An Introduction to the Study of Television by Graeme Burton
Graeme Burton
Used - Very Good
Paperback
Hodder Education
2000-07-28
332
N/A
Book picture is for illustrative purposes only, actual binding, cover or edition may vary.
This is a used book - there is no escaping the fact it has been read by someone else and it will show signs of wear and previous use. Overall we expect it to be in very good condition, but if you are not entirely satisfied please get in touch with us
Trustpilot