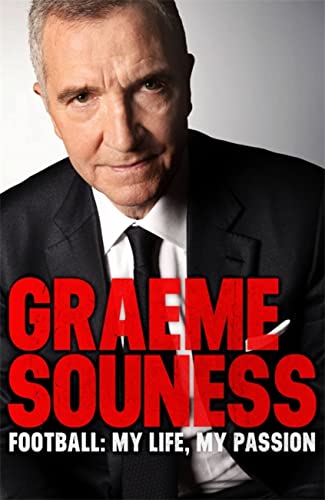 Used Price
$21.49
inc. GST
Free Shipping in Australia
A perceptive and opinionated autobiography, and an assessment of the state of the game which has been Graeme Souness' lifetime passion, drawing extensively on his incredible experience as a player, manager and pundit.
Reviews:
Trustpilot
Very Good Good

Graeme Souness is a Glasgow Rangers icon, and a Liverpool legend in the same bracket as Kenny Dalglish, Steven Gerrard and Jamie Carragher.

He has racked up getting on for fifty years in and around the world of professional football. The game has been his life, and his enduring passion.

Souness has written a perceptive and opinionated autobiography. It chronicles one of the most successful and colourful careers in the history of British football. But it also provides an intriguing assessment of the game which has dominated his existence, drawing extensively on his incredibly rich and varied experiences as a player, manager and pundit.

The result is a shrewd, incisive and hard-hitting memoir, at times tinged with hindsight and regret, which also grapples with many of the major talking points affecting the game today. It is shot through with Souness' trademark tenacity and wisdom, and with fantastic anecdotes from his glittering career.

In many ways, Football: My Life, My Passion is the story of the last half-century of British football writ large.

When Graeme Souness talks about football there are, naturally enough, frequent reminders of how he played the game. Intelligence and confidence are much in evidence and some subjects are tackled as abrasively as opponents on the field once were. - The Sunday Times

Graeme Souness was born in Edinburgh in 1953. His career begun as an apprentice at Tottenham Hotspur under Bill Nicholson, after which he spent six seasons at Middlesbrough and won a promotion to the First Division in 1973-74. His seven seasons at Liverpool brought incredible success, including three European Cups, five First Division championships and four League Cups. Skippering the team for much of his time at Anfield, he made 358 appearances and scored 56 goals before leaving for Sampdoria in Italy in 1984. He won the Coppa Italia there, for the first time in the Genoa club's history. He returned to Britain in 1986 as player-manager of Rangers, ushering in 'The Souness Revolution' and bringing with it four Scottish Premier Division titles and four Scottish Cups.
Souness returned to Anfield as manager in 1991, delivered the FA Cup in 1992, then managed Galatasaray (where he won the Turkish Cup and Super Cup), Southampton, Torino, Benfica, Blackburn Rovers (where he won the League Cup and achieved promotion to the Premier League) and Newcastle United.
Souness was awarded 54 caps for his country, and played at the 1978, 1982 and 1986 World Cup finals.
He now writes a column for The Sunday Times and is a pundit on Sky Sports.

GOR008817754
Graeme Souness - Football: My Life, My Passion by Graeme Souness
Graeme Souness
Used - Very Good
Hardback
Headline Publishing Group
2017-10-19
288
1472242521
9781472242525
N/A
Book picture is for illustrative purposes only, actual binding, cover or edition may vary.
This is a used book - there is no escaping the fact it has been read by someone else and it will show signs of wear and previous use. Overall we expect it to be in very good condition, but if you are not entirely satisfied please get in touch with us.