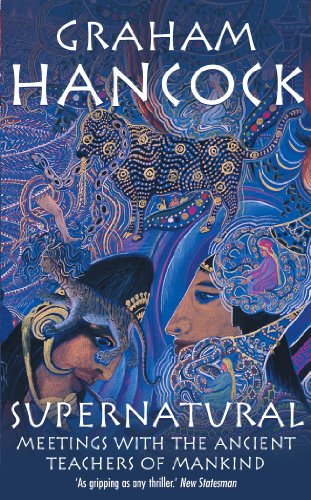 He uncovers clues that lead him to travel to the depths of the Amazon rainforest to drink the powerful plant hallucinogen Ayahuasca with Indian shamans, whose paintings contain images of "supernatural beings" identical to the animal-human hybrids depicted in prehistoric caves and rock shelters.

Supernatural: Meetings with the Ancient Teachers of Mankind by Graham Hancock

"Supernatural: of or relating to things that cannot be explained according to natural laws."

Less than 50,000 years ago mankind had no art, no religion, no sophisticated symbolism, no innovative thinking. Then, in a dramatic and electrifying change, described by scientists as "the greatest riddle in human history", all the skills and qualities that we value most highly in ourselves appeared already fully formed, as though bestowed on us by hidden powers.

In Supernatural Graham Hancock sets out to investigate this mysterious "before-and-after moment" and to discover the truth about the influences that gave birth to the modern human mind.
His quest takes him on a journey of adventure and detection from the stunningly beautiful painted caves of prehistoric France, Spain and Italy to remote rock shelters in the mountains of South Africa where he finds a treasure trove of extraordinary Stone Age art.

He uncovers clues that lead him to travel to the depths of the Amazon rainforest to drink the powerful plant hallucinogen Ayahuasca with Indian shamans, whose paintings contain images of "supernatural beings" identical to the animal-human hybrids depicted in prehistoric caves and rock shelters. And hallucinogens such as mescaline, also produce visionary encounters with exactly the same beings. Scientists at the cutting edge of consciousness research have begun to consider the possibility that such hallucinations may be real perceptions of other "dimensions".

Could the "supernaturals" first depicted in the painted caves and rock shelters be the ancient teachers of mankind? Could it be that human evolution is not just the "blind", "meaningless" process that Darwin identified, but something else, more purposive and intelligent, that we have barely even begun to understand?

Hancock's most important book . . . Quite stunning * Independent on Sunday *
Hancock's work is a welcome exploration and celebration of the mystery inside our skulls * The Guardian *
Hancock is intelligent and articulate and his writing is as expert as you would expect from an esteemed international correspondent * The Scotsman *

Graham Hancock is the author of the major international bestsellers The Sign and The Seal, Fingerprints of the Godsand Heaven's Mirror. His books have sold more than five million copies worldwide and have been translated into 27 languages. His public lectures and TV appearances, including the three-hour series Quest For The Lost Civilization, have put his ideas before audiences of tens of millions. He has become recognized as an unconventional thinker who raises legitimate questions about humanity's history and prehistory and offers an increasingly popular view of our shared history.

GOR001592205
Supernatural: Meetings with the Ancient Teachers of Mankind by Graham Hancock
Graham Hancock
Used - Very Good
Paperback
Cornerstone
2006-10-05
864
0099474158
9780099474159
N/A
Book picture is for illustrative purposes only, actual binding, cover or edition may vary.
This is a used book - there is no escaping the fact it has been read by someone else and it will show signs of wear and previous use. Overall we expect it to be in very good condition, but if you are not entirely satisfied please get in touch with us.