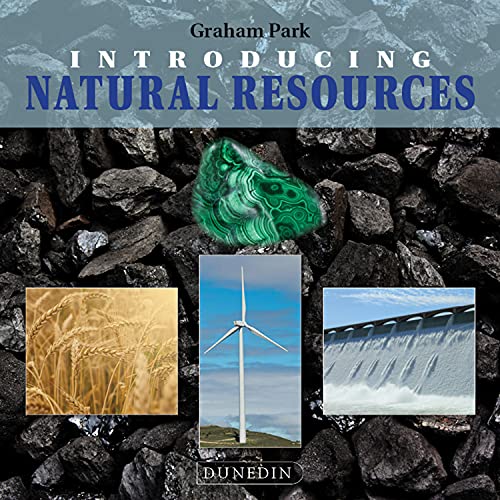 An illustrated introduction to the science surrounding the Earth's resources, both renewable and non-renewable.

Over the many millennia that the human race has inhabited our planet, a use has been found for almost everything that is to be found on it. However, since the Industrial Revolution, many of the resources that we have come to rely on are being depleted, some at an alarming rate. Misuse of others, such as fossil fuels, is causing such damage to the environment that measures are being taken at an international level to restrict their use
Introducing Natural Resources explains how the natural resources of the Earth originated, by outlining the astronomical and geological evolution of the planet in the early period of its existence. The genesis, mode of occurrence, and abundance of the various non-renewable mineral resources are described, together with the methods of extraction, extent of reserves, and any environmental problems. The use of renewable resources, such as solar energy, air, and water, are then discussed, together with plant and animal life, which are renewable resources only if properly managed. The book concludes with a summary of future issues in resource management.
Copiously illustrated, this book is intended for those whose interest in natural resources has been stimulated, perhaps by media coverage of declining resources or environmental pollution, and who want to better understand the issues involved. Technical terms are kept to a minimum and are explained in a glossary.

'In a succinct yet thorough manner, Park (emer., Univ. of Keele, UK) successfully presents information on Earth's renewable and nonrenewable resources, including the complex issues associated with their use. Concepts are simply explained because general readers are the intended audience. The book begins with an engaging dialogue about the origin of the solar system, the physical evolution of Earth, its geologic processes, and available renewable and nonrenewable resources. For the nonrenewables, including metallic and non-metallic minerals, economic deposits of rock, and energy sources (e.g., coal, oil, natural gas), Park includes basic information about how they are used, the history of their use, how they occur, their relative abundance, worldwide production and trends, and associated environmental concerns. A discussion of Earth's atmosphere, oceans, and biosphere follows. Next, the author discusses renewable energy sources (i.e., biomass, solar, geothermal, wind, hydro and tidal/wave power); this is equally informative as the nonrenewables presentation. The narrative is supported by numerous color photographs, tables, figures, and graphs; a glossary of technical terms; an appendix identifying divisions of Earth's geologic time and igneous rock types; and a brief list of selected readings. The book's overall value is in its concise, well-supported documentation of Earth's resources and related issues.' Choice, USA'Overall, this is a good overview of the topic and I would recommend it alongside other titles in the Dunedin series. For someone with no previous knowledge of geology it would an excellent starting point for any interested adult to learn about natural resources and their essential geology. As the publisher's information points out it is also intended as a course text for 'minor' courses and as inspiration for aspiring scientists thinking about their degree options. It is also available as an eBook.' Geological Curator'The book is aimed at "those, whose interest in natural resources has been stimulated perhaps by media coverage of declining resources or environmental pollution and who want to better understand the issues involved". Its somewhat superficial nature means that any serious student would have little need for this book, but it is well written and interesting nonetheless.The book has three main parts; the first covers the origin and early history of the Earth. This is followed by two geology-orientated chapters, describing how mineral resources are redistributed and concentrated in various settings. This is the most technical part of the book and some geological knowledge would be useful.The second main part of the book is on much safer ground. It describes the periodic table, starting with the transition and post-transitional metals, then continues with the alkali and alkali earth metals, and ends with the non-metallic elements.Each example is described in the same manner; first, a brief description of the element with its chemical symbol and atomic number. Then a history of its use, followed by the occurrence and host minerals of the element, and finally current production vol-umes (there are numerous tables showing major producing coun-tries, although years vary) and what remaining resources may be.Although repetitive in format, this part of the book is interest-ing and could act as a handy aide-memoir rather than having to drag a big book down from the shelf.The last part of the book is devoted to energy resources, both renewable and non-renewable. The author discusses the origin and uses of coal, oil, natural gas, biogas and gas hydrates, and nuclear power. Graham outlines the environmental concerns associated with the consumption of fossil fuels such as pollution, contamination and the production of greenhouses gases. Renewable energies are discussed, including biomass, solar, geothermal, wind and hydro energy.The book finishes with a summary of the challenges facing the planet in providing energy for the future without irreparably damaging it.Overall, this book is informative and nicely illustrated but, by its nature, can only act as a guide for further research. A selected reading list is included.' Proceedings of the OUGS

Graham Park is Emeritus Professor of Tectonic Geology at the University of Keele and has proved a successful author of introductory earth science books including the popular Introducing Geology in this series.

NGR9781780460482
9781780460482
1780460481
Introducing Natural Resources by Graham Park
Graham Park
Introducing Earth and Environmental Sciences
New
Paperback
Dunedin Academic Press
2015-12-10
117
N/A
Book picture is for illustrative purposes only, actual binding, cover or edition may vary.
This is a new book - be the first to read this copy. With untouched pages and a perfect binding, your brand new copy is ready to be opened for the first time
Trustpilot