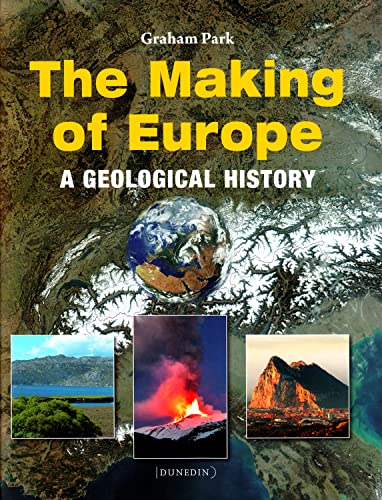 The Making of Europe by Graham Park

Graham Park examines the way in which Europe has been assembled through geological time by the addition of various components, some of which have travelled a considerable distance across the globe.

The Making of Europe: A geological history by Graham Park

The continent of Europe, as a recognisable geographic entity, attained roughly its present shape around 20 million years ago. Even since then, the European coastline has undergone significant changes, due mainly to sea-level movements, to form the outline of the continent that we are familiar with from maps and the photographs of Europe from space that we view today.

Graham Park relates how Europe has been assembled through geological time by the accretion of various distinct geological components, some of which have travelled a considerable distance across the globe to reach their present positions.

The Making of Europe is a book for all those curious about the origins, variety and geological history of the continent of Europe. Why are there such distinct regions and landscapes, ranging from the wide plains of Northern Europe to the mountains of the South?

Although some previous knowledge of geology will be useful, important geological concepts are explained in the Introduction, technical terms are kept to a minimum and a comprehensive glossary is provided in addition to an index. Copiously illustrated in colour, this book will educate and inform all those who are interested in European geology.

Today, much of Europe is a geopolitical entity born out of the single piece of crust that we sit on. That has only been the case for the past 20 million years or so. Inthis book, Graham takes us back to a time when what is now Europe was different pieces of ancient crust. He traces the various orogenies that have shaped and finally brought Europe together.It's a story about immense tectonic processes that have acted over the past 3 billion years from the fragments of the Archaean through to the products of the Alpine Orogeny. Inthis overview, Graham takes us through the 'building blocks' of Europe that have been assembled to make the landmass we now live on.

The Mesozoic evolution of Europe takes in the break-up of Pangaea during the Triassic and the subsequent development of widespread sedimentary basins during the Jurassic and Cretaceous. These conditions continued into Mid-Cenozoic times and were brought to an abrupt halt by the Alpine Orogeny. The final chapter deals with the subsequent events in the Neogene and Quaternary that have shaped the present day Europe.

Such an epic journey only makes sense with a good guide, aided by excellent maps, diagrams and photographs. Graham guides the reader with the minimum of terminology and keeps you focussed on the 'big picture' without getting bogged down in the detail. You will see our own British Isles evolution in a new light!' Down to Earth

'As a fan of the Dunedin Academic Press geology books

generally, I was interested to read this offering. It provides a comprehensive look at the geological history of Europe, trying to answer the question of why are there such distinct regions and landscapes, ranging from the wide plains of Northern Europe to the mountains of the South? Graham Park achieves this aspiration and his text is readable andvery well illustrated with a good balance of photographs and explanatory diagrams, all in colour.
However, this is no introductory text and some previousknowledge of geology is assumed and probably required, although a newcomer could make sense of it all with theintroductory chapter on geological concepts and the denseglossary. To me though, it is not a book to read from page 1 to the last page, but something to dip into for general interest in a particular period (for me the CaledonianOrogeny chapter) or relating to a region of interest (perhapsin advance of a holiday). The last chapter on the Neogene and Quaternary, although very brief on the latter, provides a perspective on the whole of Europe that is refreshing, when compared to most texts that tackle the confines of one country only.
It would make a good undergraduate course text for a geology student in a range of courses. However, other than in the largest natural history or geology museums, it would be difficult to argue that it would be a relevant title to stockin a museum shop, compared to the 'Introducing' series of titles from Dunedin Academic Press. For a curator trying to prepare an exhibition covering any aspect of the wide reach of this book, it could make a very useful resource and I would recommend having it in the library or on a personal bookshelf.' Geological Curator
'This book is a comprehensive overview of how the shape and structure of Europe as we know it today came about. It describes the tectonic evolution and geological events that contributed to its formation from the Precambrian to the Cenozoic.
After a short, basic introduction, the book begins in the Pre-Cambrian by describing the stable core of a Proto-Europe, the East European Craton and the various domains, provinces and suture zones that contributed to its make-up. The addition of other elements to this core is described in the context of the global plate tectonic movements during the Paleozoic. There is a chapter on the Caledonian Orogeny, and another on the Variscan and Uralian orogenies. Moving on to the Mesozoic, Europe relationship to Pangaea and its breakup is described, followed by a chapter on the Alpine Orogeny, by which time Europe had roughly reached its present shape. The book finishes with a chapter on the most recent changes that affected the history of the growth of Europe during the late Cenozoic.
Professor Park describes the tectonic movement of the variouslandmasses about the globe coming together, colliding and drifting apart as if they were flotsam and jetsam on a lazy tide.
The book is copiously illustrated with colourful figures, which repay careful study in conjunction with reading the text. The current outline of Europe has been superimposed on the illustrative maps of the zones, terranes, provinces, shields, seas, etc. that made up the geology of Europe at different time periods, so that some idea can be gained of their relationship to the present.
Cartoons of the tectonic evolution through time, showing the opening and closing of oceans, terrane assemblage, formation of mountain belts, and of fault zones, etc. are very informative.
Photographs illustrating various aspects of the geology are also included, with annotated satellite images of geological tectonic features being particularly interesting.' Proceedings of the OUGS

Graham Park is Emeritus Professor of Tectonic Geology at the University of Keele and the author of the popular books Introducing Geology and Introducing Tectonics, Rock Structures and Mountain Belts also published by Dunedin Academic Press.

NPB9781780460239
9781780460239
1780460236
The Making of Europe: A geological history by Graham Park
Graham Park
New
Paperback
Dunedin Academic Press
2014-09-25
164
N/A
Book picture is for illustrative purposes only, actual binding, cover or edition may vary.
This is a new book - be the first to read this copy. With untouched pages and a perfect binding, your brand new copy is ready to be opened for the first time
Trustpilot