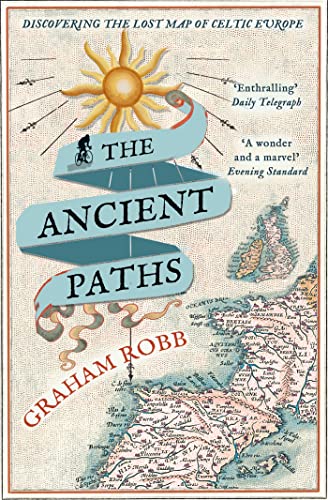 The Ancient Paths
by Graham Robb

In Stock
$16.49
inc. GST
From the bestselling author Graham Robb, The Ancient Paths contains a discovery that will transform your understanding of pre-Roman Europe.
Like New Very Good Well Read
Only 2 left

The Ancient Paths: Discovering the Lost Map of Celtic Europe by Graham Robb

Graham Robb's The Ancient Paths will change the way you see European civilization.

Inspired by a chance discovery, Robb became fascinated with the world of the Celts: their gods, their art, and, most of all, their sophisticated knowledge of science. His investigations gradually revealed something extraordinary: a lost map, of an empire constructed with precision and beauty across vast tracts of Europe. The map had been forgotten for almost two millennia and its implications were astonishing.

Minutely researched and rich in revelations, The Ancient Paths brings to life centuries of our distant history and reinterprets pre-Roman Europe. Told with all of Robb's grace and verve, it is a dazzling, unforgettable book.

'remarkable . . . an overarching, wondrous reworking of history rooted in painstaking, if not obsessive, research. And if its fantastical connections and arcane details leave the reader reeling, perhaps that is merely a reflection of the astounding complexity and continuing mystery of a lost civilisation that Graham Robb has restored to its rightful place.' Philip Hoare, Literary Review
'a wonderful writer . . . No one else can make a bike ride through the French countryside so enthralling. No one else so relishes the odd corners of history.' Sunday Times
'Robb produces an elaborately detailed account of [Celtic] society and ideas . . . Those who enjoy a mixture of myth and archaeology, who admire a vivid metaphor and a fine turn of phrase, will find much in this book to enjoy.' New Statesman
'He is such a warm, gentle and generous writer, with no faux scholarly tosh or solitary ecstasy riffs [and] Robb's own calm eloquence is deeply persuasive . . . If Graham Robb has discovered that Ancient Gaul was arranged as a reflection of the universe, then that amazing discovery, and this heroically courageous publication of it, is a wonder and a marvel.' Adam Nicolson, Evening Standard
'The findings of Graham Robb, a biographer and historian, bring into question two millennia of thinking about Iron Age Britain and Europe and the stereotyped image of Celts as barbarous, superstitious tribes.' Daily Telegraph
`Presenting one of the most astonishing, significant discoveries in recent memory, Robb, winner of the Duff Cooper Prize and Ondaatje Award for The Discovery of France, upends nearly everything we believe about the history-or, as he calls it, protohistory-of early Europe and its barbarous Celtic tribes and semimythical Druids. Popularly dismissed as superstitious, wizarding hermits, Robb demonstrates how the Druids were perhaps the most intellectually advanced thinkers of their age: scientists and mathematicians who, through an intimate knowledge of solstice lines, organized their towns and cities to mirror the paths of their Sun god, in turn creating the earliest accurate map of the world. In his characteristically approachable yet erudite manner, Robb examines how this network came to be and also how it vanished, trampled over by a belligerent Rome, which has previously received credit for civilizing Europe-though in Robb's account, Caesar, at the helm, appears dim, unwitting, and frankly lucky, and the (often literally) deeply buried Celtic beliefs and innovations seem more relevant in modern Europe than previously assumed. Like the vast and intricate geographical latticework that Robb has uncovered, the book unfurls its secrets in an eerie, magnificent way-a remarkable, mesmerizing, and bottomless work.' Publishers Weekly, Starred Review and Pick of the Week
'One certainly has to admire the perseverance Robb has shown, not just researching in libraries and map rooms, but also following trails on the ground. Fifteen thousand miles on a bike, very often to places that no tourist or researcher has ever visited or even inquired about before . . . If you accept Robb's complex arguments, drawn from astronomy, philology, archaeology and history, you do indeed get a new view of an ancient civilisation . . . all those miles on the bike. All those archaeological discoveries pointed out. If nothing else, The Ancient Paths creates a new respect for the ancient Gauls, and the ancient Britons. Whatever Caesar may have said, they weren't all woad and moustaches.' Tom Shippey, Guardian
'an enthralling new history . . . 'Important if true' . . . rings loud in the ears as one reads the latest book by Graham Rob, a biographer and historian of distinction whose new work, if everything in it proves to be correct, will blow apart two millennia of thinking about Iron Age Britain and Europe and put several scientific discoveries back by centuries . . . it presents extraordinary conclusions in a deeply persuasive and uncompromising manner. What surfaces from these elegant pages - if true - is nothing less than a wonder of the ancient world: the first solid evidence of Druidic science and its accomplishments and the earliest accurate map of a continent . . . a book almost indecently stuffed with discoveries . . . suggestions follow thick and fast, backed by a mixture of close reading, mathematical construction and scholarly detective work . . . Robb manages his revelations with a showman's skill, modestly conscious that his book is unfurling a map of Iron Age Europe and Britain that has been inaccessible for millennia. Every page produces new solutions to old mysteries, some of them so audacious that the reader may laugh aloud . . . Beautifully written . . . It's a magnificent piece of historical conjecture, backed by a quizzical scholarly intellect and given a personal twist by experiment . . . watching its conclusions percolate through popular and academic history promises to be thrilling. Reading it is already an electrifying and uncanny experience: there is something gloriously unmodern about seeing a whole new perspective on history so comprehensively birthed in a single book. If true, very important indeed.' * Daily Telegraph *
'The Romans did a good job of writing their predecessors out of history . . . As the conquerors got to write the history, we have to rely on their account of what they found. But as Robb makes clear, they told only part of the story.' Observer
An ingenious and thoroughly gripping historical and archaeological bolt from the blue -- Books of the Year * New Statesman *

Graham Robb was born in Manchester in 1958 and is a former Fellow of Exeter College, Oxford. He has published widely on French literature and history. His 2007 book The Discovery of France won both the Duff Cooper and Royal Society of Literature Ondaatje Prizes. For Parisians the City of Paris awarded him the Grande Medaille de la Ville de Paris. He lives on the English-Scottish border.

GOR007994137
The Ancient Paths: Discovering the Lost Map of Celtic Europe by Graham Robb
Graham Robb
Used - Like New
Paperback
Pan Macmillan
2014-07-03
400
0330531514
9780330531511
Long-listed for Dolman Travel Book of the Year Award 2014 (UK)
Book picture is for illustrative purposes only, actual binding, cover or edition may vary.
This is a used book - there is no escaping the fact it has been read by someone else and it will show signs of wear and previous use. Overall we expect it to be in very good condition, but if you are not entirely satisfied please get in touch with us.