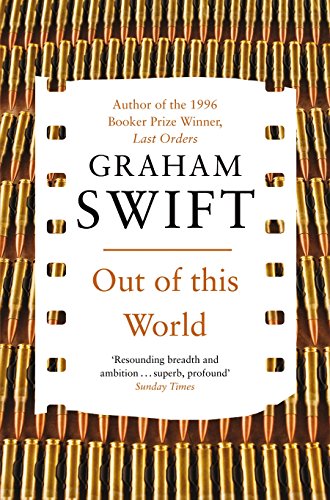 Out of This World
by Graham Swift

Used Price
$19.99
inc. GST
Free Shipping in Australia
Out of this World is `a powerful and exciting book that raises uncomfortable political questions' The Times.
Reviews:
Trustpilot
Like New Well Read

Out of This World Summary

Out of This World by Graham Swift

In 1972, Robert Beech, First World War survivor and present-day armaments maker, is killed by a car bomb. The event breaks the career of his son Harry, a news photographer, and comes close to destroying his granddaughter Sophie.

Ten years later, the Falklands War has begun and both Harry, now working as an aerial photographer, and Sophie, visiting an analyst in New York, are haunted by a past that has scarred and divided them.

`As tense as a thriller . . . a powerful and exciting book that raises uncomfortable political questions' The Times

`It appeals to the emotions, the intellect and the imagination, and its elegance is as durable as Greek art . . . a novel for those who still believe in the importance of fiction, indeed of art' Scotsman

`The novel succeeds brilliantly. The impression is of having been shown all the majesty as well as the emotional complexity of history' Time Out

`Not a book the reader is likely to forget, Out of this World deserves to be ranked at the forefront of contemporary literature' New York Times Book Review

Customer Reviews - Out of This World

Graham Swift was born in 1949 and is the author of many acclaimed novels, two collections of short stories (England and Other Stories, and Learning to Swim and Other Stories) and Making an Elephant, a book of essays, portraits, poetry and reflections on his life in writing. With Waterland he won the Guardian Fiction Prize (1983), and with Last Orders the Booker Prize (1996). Both novels have since been made into films. Graham Swift's work has appeared in over thirty languages.

GOR010795710
Out of This World by Graham Swift
Graham Swift
Used - Like New
Paperback
Pan Macmillan
2010-04-02
224
0330518275
9780330518277
N/A
Book picture is for illustrative purposes only, actual binding, cover or edition may vary.
The book has been read, but looks new. The book cover has no visible wear, and the dust jacket is included if applicable. No missing or damaged pages, no tears, possible very minimal creasing, no underlining or highlighting of text, and no writing in the margins.