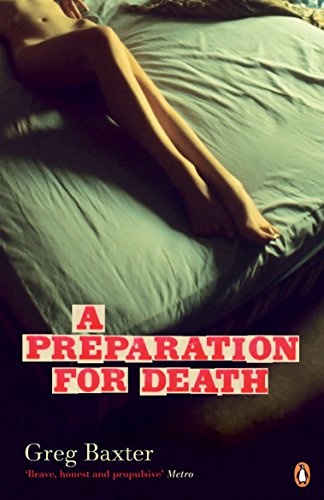 A Preparation for Death
by Greg Baxter

In Stock
$15.49
inc. GST
In his early thirties, Greg Baxter found himself in a strange place. He hated his job, he was drinking excessively, he was sabotaging his most important relationships, and he was no longer doing the thing he cared about most: writing. This title documents the chaos and discovery of that time and the experiences that led him to that strange place.
Very Good Good
Only 2 left

A Preparation for Death Summary

A Preparation for Death by Greg Baxter

'Traditional autobiography is composed after the experience has passed. I wrote this book in the very panic of the experiences that inspired it ... '

In his early thirties, Greg Baxter found himself in a strange place. He hated his job, he was drinking excessively, he was sabotaging his most important relationships, and he was no longer doing the thing he cared about most: writing. Strangest of all, at this time he started teaching evening classes in creative writing - and his life changed utterly.

A Preparation for Death is a document of the chaos and discovery of that time and of the experiences that led Greg Baxter to that strange place - an extraordinarily intimate account of literary failure (and its consequences), personal decay, and redemption through reading, writing, and truth-telling. Studded with vivid, loving portraits of the people closest to him - his Austrian grandmother, who narrowly survived the Second World War; his mother and father, both described with heartbreakingly close attention; and his cousin Walter, whose own demons provide a striking counterpoint to the author's - it is above all a stunningly vivid and searching self-portrait: possibly the most honest book you'll ever read.

A Preparation for Death Reviews

Brilliant and wonderfully original ... Yes, this is a book about drinking and shagging. But rarely have these things been written about so well -- William Leith * Literary Review *
Baxter is a serious, thoughtful writer, bent on emotional truth and artistry. He has written an unusual, provocative book. -- Suzi Feay * Financial Times *
The triumph is in the steely courage it takes to put a life down with such uncompromising clarity -- Hugo Hamilton * Irish Times *
Baxter tells his story with a captivating and rare honesty * Sunday Times *
Brave, honest and propulsive * Metro *
A sustained and gripping meditation on art and authenticity. ... one of those books about almost nothing, that manage to be about almost everything -- James Lasdun * Guardian *
Brilliant - he writes well about everything ... Could be a classic * Evening Standard *

Greg Baxter was born in Texas in 1974. For the past ten years he has lived in Dublin, where he works as a journalist.

GOR003043466
A Preparation for Death by Greg Baxter
Greg Baxter
Used - Very Good
Paperback
Penguin Books Ltd
2011-04-07
224
0141048441
9780141048444
N/A
Book picture is for illustrative purposes only, actual binding, cover or edition may vary.
This is a used book - there is no escaping the fact it has been read by someone else and it will show signs of wear and previous use. Overall we expect it to be in very good condition, but if you are not entirely satisfied please get in touch with us.