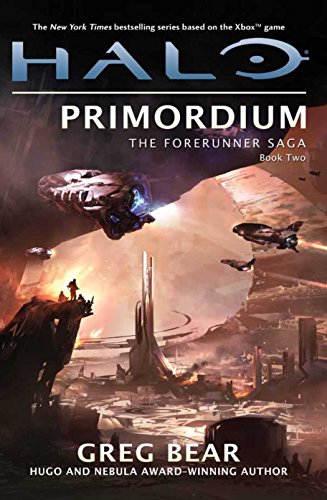 In the wake of the apparent self-destruction of the Forerunner empire, two humans - Chakas and Riser - are like flotsam washed up on very strange shores indeed.

They find themselves on an inverted world where horizons rise into the sky and where humans of all kinds are trapped in a perilous cycle of neglect. They have become strategic pawns in a cosmic game whose madness knows no end - a game of ancient vengeance between the powers who seeded the galaxy with life, and the Forerunners.

In the company of a young girl and an old man, Chakas begins an epic journey across a lost and damaged Halo in search of a way home, an explanation for the warrior spirits rising up within, and for the Librarian's tampering with human destiny.

This journey will take them into the domain of a powerful and monstrous intelligence who claims to be the Last Precursor, and who now has control of both this Halo and the fate of Forerunners and humans alike.

Called the Primordial by ancient human warriors, this intelligence may control the fate of not only Chakas, Riser, and the rest of humanity, but all of sentient life.

Greg Bear is the author of more than thirty books of science fiction and fantasy. He is married to Astrid Anderson Bear and is the father of Erik and Alexandra. Awarded two Hugos and five Nebulas for his fiction, one of two authors to win a Nebula in every category, Bear has been called the 'Best working writer of hard science fiction' by 'The Ultimate Encyclopedia of Science Fiction'. Bear has served on political and scientific action committees and has advised Microsoft Corporation, the U.S. Army, the CIA, Sandia National Laboratories, Callison Architecture, Inc., Homeland Security, and other groups and agencies.

GOR003598513
Halo: Primordium: Book Two of the Forerunner Trilogy by Greg Bear
Greg Bear
Used - Very Good
Paperback
Pan Macmillan
2012-01-01
384
0230758290
9780230758292
N/A
Book picture is for illustrative purposes only, actual binding, cover or edition may vary.
This is a used book - there is no escaping the fact it has been read by someone else and it will show signs of wear and previous use. Overall we expect it to be in very good condition, but if you are not entirely satisfied please get in touch with us.