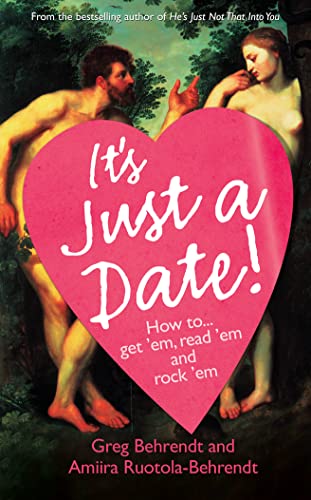 It's Just a Date
by Greg Behrendt

The fab new guide to dating co-authored by Greg Behrendt, former writer on Sex and the City, who won women's hearts with his two million copy bestseller 'He's Just Not That Into You'.

It's Just a Date Summary

It's Just a Date: How to Get `Em, How to Read `Em, And How to Rock `Em by Greg Behrendt

The fab new guide to dating co-authored by Greg Behrendt, former writer on Sex and the City, who won women's hearts with his two million copy bestseller 'He's Just Not That Into You'.

What ever happened to dating? Used to be that a guy would ask a girl out. He'd pick her up at her house and take her out for dinner, a movie, or a cup of coffee and some conversation. Then both parties would decide if they wanted to do it again next week. There was protocol. A standard set of guidelines to follow for this age-old ritual. Now who even knows what dating is? There are so many social pressures and panics that dating has become an anxiety-riddled experience complicated by the sexual revolution, the internet and Richard Curtis movies.

'It's Just a F***ing Date' will give you tools, not rules that you can use to protect yourself, while also opening you up to new ideas about how to date and who might be right for you. Dating doesn't have to be hard - in fact, if not taken so seriously, it can be seriously fun.

Dating guide includes:
* The digital age and how it's changed dating, including mobile phones, e-mailing, text messaging (the new not calling) and online dating.
* The compromise: hooking up, booty calls and quasi dates - was it or wasn't it a date?
* Telling your current person about your exes.
* Exit strategies - how to pull the plug when the dating isn't working out.

It's Just a Date Reviews

Praise for 'It's Called a Breakup Because It's Broken':

'It's funny, it's snappy and it's very positive.' Richard & Judy

'You will get through this, and you'll do it faster with the help of "It's Called a Breakup Because It's Broken".' Glamour

Praise for 'He's Just Not That Into You':

'The publishing sensation of the year.' Daily Telegraph

'A new dating book, HJNTIY, is taking Britain by storm... The book cuts to the core of men's behaviour.' Daily Mail

Comedian Greg Behrendt was a consultant for three consecutive seasons on Sex and the City, where he and Liz Tucillo, a writer on the programme, developed the idea of He's Just Not That Into You. The book became a runaway success in the US. His acclaimed stand-up comedy has been seen on HBO, The Tonight Show, Late Show with David Letterman and Late Night with Conan O'Brien. He lives in Los Angeles with his wife, Amiira Ruotola-Behrendt, and their two children.

GOR001994912
It's Just a Date: How to Get `Em, How to Read `Em, And How to Rock `Em by Greg Behrendt
Greg Behrendt
Used - Very Good
Paperback
HarperCollins Publishers
2008-07-01
256
0007233205
9780007233205
N/A
Book picture is for illustrative purposes only, actual binding, cover or edition may vary.
This is a used book - there is no escaping the fact it has been read by someone else and it will show signs of wear and previous use. Overall we expect it to be in very good condition, but if you are not entirely satisfied please get in touch with us.