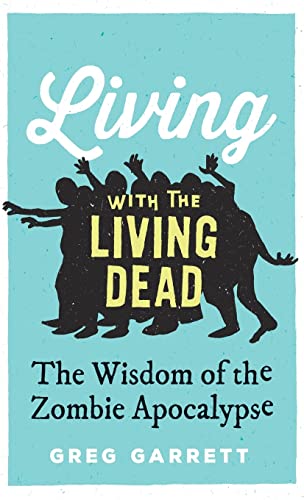 Living with the Living Dead
by Greg Garrett (Professor of English, Baylor University)

In Stock
$11.99
+10% GST
In Living with the Living Dead, Greg Garrett shows that the zombie apocalypse has become an archetypal narrative for the contemporary world, in part because zombies can represent a variety of global threats, from terrorism to Ebola, from economic uncertainty to mental illness.
Very Good
Only 1 left

Living with the Living Dead Summary

Living with the Living Dead: The Wisdom of the Zombie Apocalypse by Greg Garrett (Professor of English, Baylor University)

When humankind faces what it perceives as a threat to its very existence, a macabre thing happens in art, literature, and culture: corpses begin to stand up and walk around. The dead walked in the fourteenth century, when the Black Death and other catastrophes roiled Europe. They walked in images from World War I, when a generation died horribly in the trenches. They walked in art inspired by the Holocaust and by the atomic attacks on Japan. Now, in the early twenty-first century, the dead walk in stories of the zombie apocalypse, some of the most ubiquitous narratives of post-9/11 Western culture. Zombies appear in popular movies and television shows, comics and graphic novels, fiction, games, art, and in material culture including pinball machines, zombie runs, and lottery tickets. The zombie apocalypse, Greg Garrett shows us, has become an archetypal narrative for the contemporary world, in part because zombies can stand in for any of a variety of global threats, from terrorism to Ebola, from economic uncertainty to ecological destruction. But this zombie narrative also brings us emotional and spiritual comfort. These apocalyptic stories, in which the world has been turned upside down and protagonists face the prospect of an imminent and grisly death, can also offer us wisdom about living in a community, present us with real-world ethical solutions, and invite us into conversation about the value and costs of survival. We may indeed be living with the living dead these days, but through the stories we consume and the games we play, we are paradoxically learning what it means to be fully alive.

Living with the Living Dead Reviews

Garrett's accessible and insightful inquiry into our zombie zeitgeist finds surprising depth in a theme usually dismissed as simple entertainment. * Publishers Weekly *
accessible * Marcus Leaning, Times Higher Education *
Using his full range of academic qualifications, Garrett skilfully combines literary criticism, cultural studies, and philosophical theology to scout these always gory, sometimes humorous, and potentially insightful creations ... those bewildered by zombies and their popularity will certainly appreciate his analysis and explanations. * John Saxbee, Church Times *
a very readable and fascinating work ... the breadth of knowledge the author displays about zombie-related media is deeply impressive * Magonia Review *
Reasoned through with Garrett's academic fervour and backed up with references from pop culture and apostles alike * Hilary A White, Irish Independent *
a fine examination of the many ways the zombie trope are reflected culturally and this will go a long way to satisfying the needs of serious zombie fans (and perhaps even those of English lit/media students). * Jonathan Cowie, Science Fact & Science Fiction Concatenation *
a good read * Fortean Times *
Omnivorously researched, Garrett's book includes references to Cormac McCarthy, Dawn of the Dead and its remake, Game of Thrones, and the New Testament, among others. Zombies, it seems, are everywhere, and the 'zombie apocalypse' narrative is the perfect metaphor for life as we know it today: transitioning 'from one state to the other, a movement so shocking that we often stand ... mouths wide open, simultaneously marveling and horrified at the changes taking place.' Garrett's writing is as mesmerizing, and as he fleshes out his case, drawing new connections, Living With The Living Dead becomes impossible to put down. With a voracious appetite for pop culture, Garrett establishes himself as a bold new voice in the nonfiction genre. * Claire Foster, Foreword Reviews *
Greg Garrett approaches this subject with great insight, intelligence, and sensitivity. The result is a well-researched but highly personal book that makes you feel like you're having a captivating philosophical discussion about life with a very wise and learned friend. Despite-or because of-its subject matter, it's a very human book. * Mark Protosevich, screenwriter of I Am Legend *
Erudite and absorbing. ... More than just a survival guide, this book considers the literary, cinematic and theological history of the zombie - the vast popularity of the genre, and the extraordinary range of meanings and anxieties that zombies have incarnated over the years. * Sam Leith, The Spectator Books Podcast *

Greg Garrett is Professor of English at Baylor University, where he teaches classes in fiction and screenwriting, literature, film and popular culture, and theology. The author or co-author of three dozen short stories, a dozen scholarly articles, and twenty books of fiction, nonfiction, and memoir, Dr. Garrett is also Theologian in Residence at the American Cathedral in Paris and a licensed lay preacher in the Episcopal Church. He lives with his family in Austin, Texas.

Introduction: Raising the Dead Chapter 1: Life, Death, and Zombies: Who Are the Walking Dead? Chapter 2: Hungry for Each Other: How Zombie Stories Encourage Community Chapter 3: Carrying the Fire: The Ethics of the Zombie Apocalypse Chapter 4: And In the End: Is the Zombie Apocalypse Good or Bad? Chapter 5: Conclusion: Living with the Living Dead Acknowledgments Notes Index

GOR008751675
Living with the Living Dead: The Wisdom of the Zombie Apocalypse by Greg Garrett (Professor of English, Baylor University)
Greg Garrett (Professor of English, Baylor University)
Used - Very Good
Hardback
Oxford University Press Inc
2017-06-01
272
0190260459
9780190260453
N/A
Book picture is for illustrative purposes only, actual binding, cover or edition may vary.
This is a used book - there is no escaping the fact it has been read by someone else and it will show signs of wear and previous use. Overall we expect it to be in very good condition, but if you are not entirely satisfied please get in touch with us.