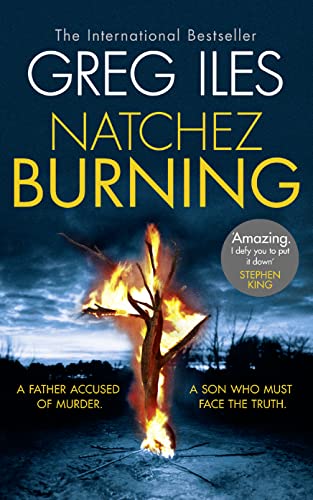 `Extraordinarily entertaining and fiendishly suspenseful' (Stephen King). The stunning new Penn Cage thriller in which a shocking murder from the 1960s finds new life - and victims - in the present.

`Extraordinarily entertaining and fiendishly suspenseful' (Stephen King). The stunning new Penn Cage thriller in which a shocking murder from the 1960s finds new life - and victims - in the present.

The sins of the past never die...

Raised in Natchez, Mississippi, former prosecuting attorney Penn Cage learned all he knows of honour and duty from his father, Dr. Tom Cage.

But now Tom stands accused of murdering on African-American nurse with whom he worked in the 1960s, when racist violence was at its peak.

As he hunts for the truth, Penn uncovers a long-buried secret that could place his family in mortal danger- a conspiracy of greed and murder connected to a vicious sect of the KKK.

Up against the most powerful men in the state, Penn faces an impossible choice: does a man of honour choose his father or justice?

"The thriller of the year, of the decade even ... The first of a projected trilogy, Natchez Burning is Penn Cage's fourth outing. But you don't need to read its predecessors to be wholly consumed by this wonderful book. Buy, read, and marvel' The Times

`Often seen as a John Grisham imitator, Iles clearly outperforms the master of the Deep South thriller in this angry yet engrossing novel' Sunday Times

`Extraordinarily entertaining and fiendishly suspenseful. I defy you to start it and find a way to put it down ...This is an amazing work of popular fiction' STEPHEN KING

`I don't know how Iles did it, but every single one of the 700+ pages of NATCHEZ BURNING is a cliffhanger that will keep you devouring just one more chapter before you put it down to eat, work, or go to bed. A mystery rooted in the real-life racial divides of the Deep South, this ambitious, unique novel is the perfect marriage of a history lesson and a thriller. Greg? You owe me some sleep!' JODI PICOULT

`Natchez Burning is just flat-out terrific, written with all the fire of its title. With its scope and passion and its themes about race, violence, tradition, and the eternal smouldering anger of the South, it brings to mind Thomas Wolfe and William Faulkner, even while its cagey plot and restless energy keeps you flying through the pages. Greg Iles is back and truly better than ever' SCOTT TUROW

`A rarity. A thriller that really thrills' Stephen King

`An incredible web of intrigue and suspense' Clive Cussler

`My favourite kind of novel ... Ambitious in its scope and superbly satisfying in its execution' Dan Brown

Greg Iles spent most of his youth in Natchez, Mississippi, and graduated from Ole Miss in 1983. His thirteen New York Times bestselling novels have been made into films, translated into more than twenty languages, and published in more than thirty-five countries worldwide. He lives in Natchez with his two teenage children.

GOR007173448
Natchez Burning (Penn Cage, Book 4) by Greg Iles
Greg Iles
Penn Cage
Used - Very Good
Paperback
HarperCollins Publishers
2014-06-05
864
0007317956
9780007317950
Short-listed for CWA Ian Fleming Steel Dagger 2014
Book picture is for illustrative purposes only, actual binding, cover or edition may vary.
This is a used book - there is no escaping the fact it has been read by someone else and it will show signs of wear and previous use. Overall we expect it to be in very good condition, but if you are not entirely satisfied please get in touch with us.