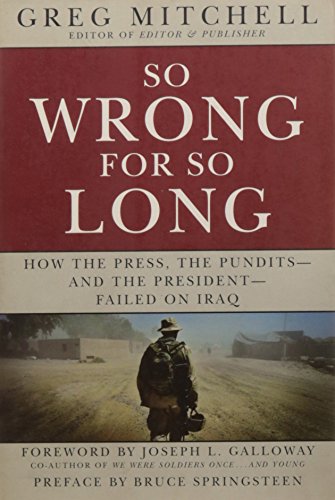 So Wrong for So Long
by Greg Mitchell

Used Price
$15.49
inc. GST
Free Shipping in Australia
It is often said that a free press is the watchdog of democracy, insuring that the conduct of our leaders is examined with a critical eye. With more than 75 of the author's columns, this book provides a history of the conflict, from the hyped "weapons of mass destruction" stories to the "surge."
Reviews:
Trustpilot
Very Good

So Wrong for So Long Summary

So Wrong for So Long: How the Press, the Pundits - and the President - Failed in Iraq by Greg Mitchell

It is often said that a free press is the watchdog of democracy, insuring that the conduct of our leaders is examined with a critical eye. This makes Greg Mitchell the watchdog of watchdogs, as tracking the performance of the media is his priority at Editor and Publisher, the influential magazine of the newspaper industry. In 2003, Greg Mitchell was one of the few journalists to question the grounds for the war in Iraq. Today, Mitchell looks ahead at lessons for the future with an original introduction and connecting material that updates and unifies his original essays and scrutiny of America's media coverage. With more than 75 of Mitchell's columns, this book provides a unique history of the conflict, from the hyped "weapons of mass destruction" stories to the "surge."

Customer Reviews - So Wrong for So Long

So Wrong for So Long Reviews

"The profound failure of the American press with regard to the Iraq War may very well be the most significant political story of this generation. Greg Mitchell has established himself as one of our country's most perceptive media critics, and here he provides invaluable insight into how massive journalistic failures enabled the greatest strategic disaster in the nation's history."--Glenn Greenwald, Salon.com columnist and author of "A Tragic Legacy and How Would a Patriot Act? """ "Anyone who cares about the integrity of the American media should read this book. Greg Mitchell asks tough questions about the Iraq war that should have been asked long ago, in a poignant, patriotic, and thoughtful dissection of our war in Iraq. Mitchell names names and places blame on those who've blundered. Examining the most complex issue of our time, he connects the dots like no one else has."--Paul Rieckhoff, Executive Director, Iraq and Afghanistan Veterans of America and author of "Chasing Ghosts"

Greg Mitchell is the editor of "Editor & Publisher," the journal of the newspaper business which has won several major awards for its coverage of Iraq and the media. He has written eight books, including "Hiroshima in America "(with Robert Jay Lifton) and T"he Campaign of the Century: Upton Sinclair's Race for Governor of California and the Birth of Media Politics," and his articles have appeared in dozens of leading newspapers and magazines. He lives in the New York City area. Joseph L. Galloway is one of the most respected war correspondents of our time and currently writes a syndicated column on military affairs. He co-authored the bestselling "We Were Soldiers Once...and Young "and the forthcoming "We Are Soldiers Still." He was awarded a Bronze Star for valor in Vietnam.

GOR005890222
So Wrong for So Long: How the Press, the Pundits - and the President - Failed in Iraq by Greg Mitchell
Greg Mitchell
Used - Very Good
Paperback
Sterling Publishing Co Inc
2008-04-24
320
1402756577
9781402756573
N/A
Book picture is for illustrative purposes only, actual binding, cover or edition may vary.
This is a used book - there is no escaping the fact it has been read by someone else and it will show signs of wear and previous use. Overall we expect it to be in very good condition, but if you are not entirely satisfied please get in touch with us.