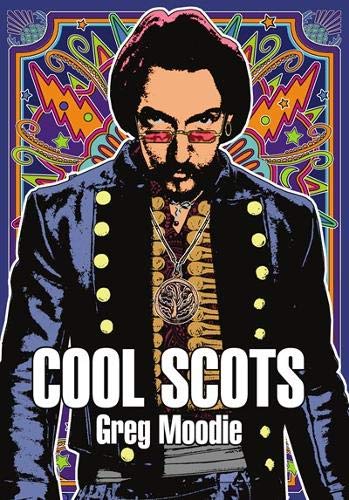 For once including those cool Scottish women so often ignored in history books, Moodie presents his collection `in an order deliberately designed to jolt your little minds out of their preconceived ideas of time'.

`There is an old Scottish saying: Some are born cool, some achieve coolness, and some have coolness thrust upon them. At least I think it's Scottish. It doesn't matter.'

What do Kenny Dalglish and Robert Louis Stevenson have in common? Or Annie Lennox and Mary Barbour? Or Joseph Knight and Sean Connery? They are but a few examples of the Scots that have shaped the cool nation we see today.

In this whacky toon-fest of character sketches, Greg Moodie presents 42 key figures in Scotland's rich and varied history. Spanning the living and the dead, the portraits range from potentially paranoid politicians and health-and-safety-loving Formula One drivers to Jacobite heroines and promiscuous poets. Basically, you get the best of the best.

Accompanying each brief biography - peppered with quirky anecdotes, hilarious quips and mostly accurate facts - is a psychedelic portrait that blends past and present. Ever seen Muriel Sparks sport a studded choker or James Clerk Maxwell boast two sleeves of tattoos? You will now.

For once including those cool Scottish women so often ignored in history books, Moodie presents his collection `in an order deliberately designed to jolt your little minds out of their preconceived ideas of time'. You'll leap between modern day musicians and 18th century science writers at the turn of each delightfully glossy page.

Greg Moodie is the cartoonist at The National, Scotland's newest daily newspaper. He is the author of three collections of cartoons, Greg Moodie versus The Union, Election Dissection and Striptease, as well as Borrowing Burns a semi-fictional or `factually dubious' account of the making of his series of Tam O'Shanter murals. Technically Dundonian, he graduated in Fine Art from the city's Duncan of Jordanstone College of Art sometime before the invention of fire, but believes what happened there stayed there.

He has written two novels, The Unbearable Stupdity of Being and Six Degrees of Stupidity, which he would like dearly to see in print again before he dies, as he's unlikely to try anything so foolhardy again. He currently resides in the Torphichen Free Republic (population 570), a conservation village and island state in hidden West Lothian.

GOR010494895
Cool Scots by Greg Moodie
Greg Moodie
Used - Like New
Hardback
Luath Press Ltd
2018-01-08
192
1912147262
9781912147267
N/A
Book picture is for illustrative purposes only, actual binding, cover or edition may vary.
This is a used book - there is no escaping the fact it has been read by someone else and it will show signs of wear and previous use. Overall we expect it to be in very good condition, but if you are not entirely satisfied please get in touch with us.