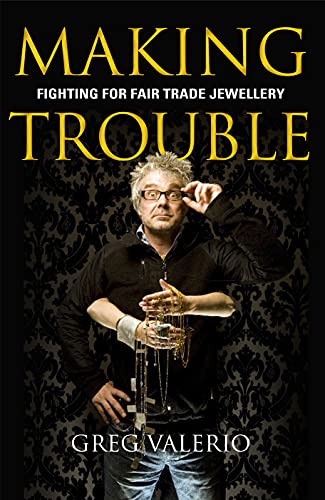 In Stock
$16.49
inc. GST
The dramatic story of Greg Valerio and his fight for just jewellery.
Very Good Good
6 in stock

"Valerio, you're a natural born trouble-maker. Just make sure you make trouble for the right reasons." Expelled from secondary school with these words ringing in his ears, it took Greg Valerio a little while to find the right cause to devote his trouble-making skills to - but eventually he found it. Fighting to apply fair trade standards to the jewellery business has brought him up against an industry riddled with problems. In the last fifteen years he has criss-crossed the globe, from the arctic circle of Greenland, alluvial diamond fields of Sierra Leone and equatorial gold rich rainforests of South America, in an effort to give the customer an ethically pure piece of jewellery, and to give the producers of that jewellery a fair wage and good working conditions. Along the way, he has exposed the jewellery industry's dirty secrets: pollution, child labour, criminality, exploitation, dangerous working practices and much more. And he has passionately argued his case in boardrooms, sumptuous hotels and with government officials from Antwerp to Cape Town, to say there is another way. Having been told it was impossible to have gold jewellery that could be certified as fairly traded from the mine to the shop, he achieved this in the UK. Founder of Cred Jewellery in 1996, he was awarded The Observer Ethical Award 2011 for Campaigner of the Year.

"Few can claim to have precipitated fundamental change in the jewellery business, but Greg Valerio is one of those who can." -- Gaetano Cavalieri - President of The World Jewellery Confederation
"Greg Valerio unveils the ugliness of the beauty business. His truth has a sting, but he also has an unflinching, contagious hope that a better world is possible." -- Shane Claiborne - Activist and founding member of The Simple Way in Philadelphia
"Greg is a true hero." -- Katharine Hamnett CBE - Fashion designer and campaigner
"A fantastic story about how one man wouldn't take no for an answer." -- Harriet Lamb CBE - CEO of Fairtrade International
"Fascinating and inspirational reading." * Life & Work *
This is a David and Goliath story of one who couldn't close his mouth against the wrongs he witnessed - not only the oppression of the workers, but the rape of the land. His model of creating a pure line of jewellery - with completely traceable gold and diamonds - shows how one man with perseverance and vision can effect change. -- Greg Valerio * Netgalley *
Founder of CRED Jewellery and The Observer's `Campaigner of the Year' in 2011, Greg Valerio refused to accept that it was impossible to have gold jewellery that could be certified as fairly traded from the mine to the shop. In achieving this ambition for the UK Market, he has also exposed the jewellery industry's dirty secrets and argued his case passionately with leaders and businessmen world-wide. -- Third Way * Third Way *

Greg Valerio is the founder of CRED Jewellery and co-founder of Fair Jewellery Action. After a long but successful campaign to produce fairly traded gold, he won the Global Campaigner Observer Ethical Awards for 2011. He is currently working with Fairtrade International (FLO) co-ordinating their International Fairtrade Gold programme, with Peace Direct on a Peace Gold programme in the Democratic Republic of Congo and is also an initiator and committee member of the British Jewellers Association and National Association of Goldsmiths ethics working group. He acts as an adviser to the Diamond Development Initiative.

GOR005519814
Making Trouble: Fighting for fair trade jewellery by Greg Valerio
Greg Valerio
Used - Very Good
Paperback
Lion Hudson Ltd
2013-09-01
208
0745956033
9780745956039
N/A
Book picture is for illustrative purposes only, actual binding, cover or edition may vary.
This is a used book - there is no escaping the fact it has been read by someone else and it will show signs of wear and previous use. Overall we expect it to be in very good condition, but if you are not entirely satisfied please get in touch with us.