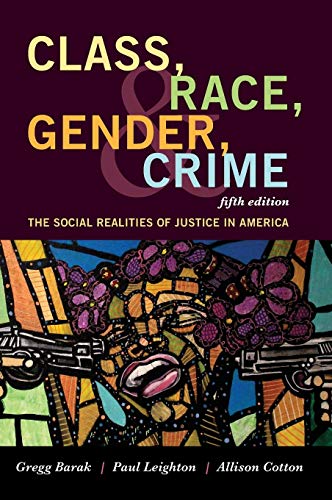 Class, Race, Gender, and Crime is an introduction to crime and the criminal justice system through the lens of class, race, gender, and their intersections. The book explores how power and privilege shape our understanding of crime and justice. The fifth edition features new material on police violence and Black Lives Matter, disability, and more.

Class, Race, Gender, and Crime: The Social Realities of Justice in America by Gregg Barak

Class, Race, Gender, and Crime is a popular, and provocative, introduction to crime and the criminal justice system through the lens of class, race, gender, and their intersections. The book systematically explores how the main sites of power and privilege in the United States consciously or unconsciously shape our understanding of crime and justice in society today. The fifth edition maintains the overall structure of the fourth edition-including consistent headings in chapters for class, race, gender, and intersections-with updated examples, current data, and recent theoretical developments throughout. This new edition includes expanded discussions of police violence and the Black Lives Matter movement, immigration, and queer criminology. This book is accompanied by a learning package designed to enhance the experience of both instructors and students. Contact textbooks@rowman.com for more information. Instructor's Manual. For each chapter in the text, this valuable resource provides a chapter outline, chapter summary, and suggestions for additional projects and activities related to the chapter. Test Bank. The Test Bank includes multiple choice, true-false, fill-in-the-blank, short answer, and essay questions for each chapter. The Test Bank is available as a Word document, PDF, or through the test management system Respondus. Respondus 4.0 (c). Respondus 4.0 (c) is a powerful tool for creating and managing exams that can be printed to paper or published directly to the most popular learning management systems. Exams can be created offline or moved from one LMS to another. Respondus LE is available for free and can be used to automate the process of creating print tests. Respondus 4.0, available for purchase or via a school site license, prepares tests to be uploaded to an LMS. Click here: http://www.respondus.com/products/testbank/search.php to submit your request.
The fifth edition of Class, Race, Gender, and Crime is, as in previous editions, a well-articulated discussion of the structural inequalities found throughout American society and reinforced through criminal justice system practices. However, this edition in particular is a timely addition to discussions of inequities within our society. The authors shine a harsh light on the nature, origin, and malignancy of long-standing and entrenched disparities that continue to marginalize, disadvantage, and disenfranchise the most vulnerable of American citizens. In doing so, the authors call immediate attention to the inherent and often untapped potential of the criminal justice system to embody and perpetuate the ideals of justice and equality. -- Jay P. Kennedy, Assistant Professor, School of Criminal Justice, Michigan State University
Barak, Leighton, and Cotton give us a much-needed lesson about the actual realities of social control in the United States-masterfully delineating the simultaneous interactions of historical, legal, economic, social, political, and ideological forces defining, shaping, and governing criminal justice policy, enforcement, and discourse over time. The authors skillfully reveal the troubling realities of justice in America, with an astute view of those who live in the margins of society-oppressed and silenced-skewed or untold stories that need to be exposed. In today's highly charged political atmosphere, Class, Race, Gender, and Crime provides readers a first-class education! -- Martin Guevara Urbina, Sul Ross State University
Gregg Barak is professor of criminology and criminal justice at Eastern Michigan University. He is the author of a number of books, including most recently his award winning book, Unchecked Corporate Power. Paul Leighton is professor of criminology and criminal justice at Eastern Michigan University. He is author or co-author of several books, including Punishment for Sale and The Rich Get Richer and the Poor Get Prison. Allison Cotton is professor of criminology and criminal justice at Metropolitan State University of Denver. She is author of the book Effigy.
Introduction: Crime, Inequality, and Justice Part I: Crime Control and Criminology 1 The Crime Control Enterprise and Its Workers 2 Criminology and the Study of Class, Race, Gender, and Crime Part II: Inequality and Privilege 3 Understanding Class and Economic Privilege 4 Understanding Race and White Privilege 5 Understanding Gender and Male Privilege 6 Understanding Privilege and the Intersections of Class, Race, and Gender Part III: Law and Criminal Justice 7 Victimology and Patterns of Victimization 8 Lawmaking and the Administration of Criminal Law 9 Law Enforcement and Criminal Prosecution 10 Punishment, Sentencing, and Imprisonment Conclusion: Crime, Justice, and Policy
NGR9781442268876
9781442268876
1442268875
Class, Race, Gender, and Crime: The Social Realities of Justice in America by Gregg Barak
Gregg Barak
New
Hardback
Rowman & Littlefield
2018-03-15
344
N/A
Book picture is for illustrative purposes only, actual binding, cover or edition may vary.
This is a new book - be the first to read this copy. With untouched pages and a perfect binding, your brand new copy is ready to be opened for the first time
Trustpilot