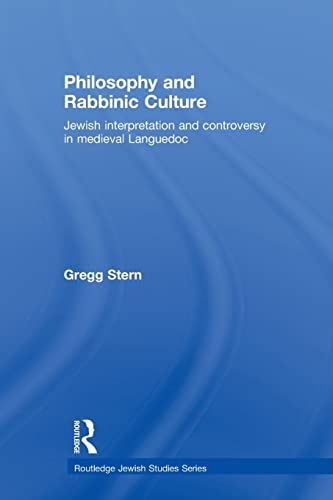 Philosophy and Rabbinic Culture is a study of the great, and curiously underappreciated, engagement of a Medieval European Jewish community with the philosophic tradition. This lucid description of the Languedocian Jewish community's multigenerational cultivation of - and acculturation to - scientific and philosophic teachings into Judaism fulfils a major desideratum in Jewish cultural history.

In the first detailed account of this long-forgotten Jewish community and its cultural ideal, the author gives an expansive reappraisal of the role of the philosophic interpretation in rabbinic culture and medieval Judaism. Looking at how the cultural ideal of Languedocian Jewry continued to develop and flourish throughout the thirteenth and fourteenth centuries, with particular reference to the literary style and religious teaching of the great Talmudist, Menahem ha-Meiri, Stern explores issues such as Meiri's theory of "civilized religions", including Christianity and Islam, controversy over philosophy and philosophic allegory in Languedoc and Catalonia, and the cultural significance of the medical use of astrological images.

This book will be of great interest to scholars and students of Religion, of Judaism in particular, and of Philosophy, History and Medieval Europe, as well as those interested in Jewish-Christian relations.

Gregg Stern holds a PhD in medieval Jewish studies from Harvard University. He has received numerous academic grants, awards and fellowships, and has conducted research and taught at colleges and universities in Israel, Canada, the United States and the United Kingdom.

1. Jewish Learning and Thought in Languedoc 2. 1250-1300: Implications of Original Philosophic Work and the Diffusion of Philosophic Learning in Languedoc 3. 1250-1300: Jewish Contacts with Christian Intellectuals and Jewish Thought Regarding Christianity 4. Meiri's Transformation of Talmud Study: Philosophic Spirituality in a Halakhic Key 5. 1300: On the Eve of the Controversy 6. 1300-1304: Knowledge and Authority in Dispute 7. 1304-1306: The Controversy Peaks 8. The Effects of the Expulsion: Jewish Philosophic Culture in Roussillon and Provence

NLS9780415782104
9780415782104
0415782104
Philosophy and Rabbinic Culture: Jewish Interpretation and Controversy in Medieval Languedoc by Gregg Stern (University of Massachussets, USA)
Gregg Stern (University of Massachussets, USA)
New
Paperback
Taylor & Francis Ltd
2010-12-07
288
N/A
Book picture is for illustrative purposes only, actual binding, cover or edition may vary.
This is a new book - be the first to read this copy. With untouched pages and a perfect binding, your brand new copy is ready to be opened for the first time
Trustpilot