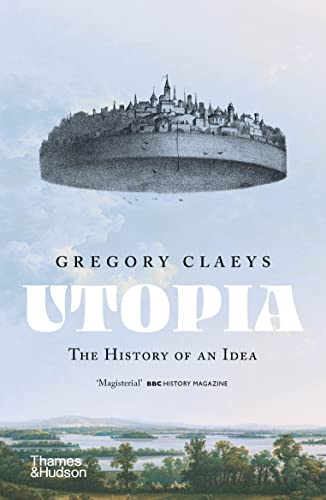 Out of Stock
$24.99
inc. GST
A worldwide survey on the idea of utopia, from classical mythology to contemporary science fiction.
Like New
Only 0 left

Utopia: The History of an Idea by Gregory Claeys

Aspirations for a better - even a perfect - society have existed throughout history, often imagined in intricate detail by philosophers, poets, social reformers, architects and artists. This book explores a perennially powerful idea: the quest for the ideal society.

Gregory Claeys surveys the influence of the idea of Utopia on history. Central to his exploration of ideal worlds are creation myths; archetypes of heaven and the afterlife; new worlds and voyages of discovery; ages of revolution and technological progress; model communities and kibbutzim; political and ecological dystopias; space travel and science fiction. The most significant utopias throughout history - whether envisaged or attempted - are covered, including visions of the ideal society in the West as well as American, Asian, African and the Arab worlds.

From classical times to the present day, this compelling book traces the enduring human need to imagine and construct ideal worlds.

Gregory Claeys has been Professor of the History of Political Thought at Royal Holloway since 1992. His many books include Utopia, Thomas Paine and the Pelican book Marx and Marxism.

The Search for Utopia * The Classical Age * Christian Archetypes * Extra-European Visions of the Ideal Society * Thomas More's Utopia * Voyages of Discovery to the New World and Beyond * The Age of Defoe and Swift * Revolution and Enlightenment * Ideal Cities: Medieval to Modern * Utopia as Community: From Shakers to Hippies * Socialism, Communism and Anarchism * Rationalism, Technology and Modernity as Utopia * The Emergence of Science Fiction * Varieties of Dystopia: Totalitarianism and After * Utopia, Science Fiction and Film: The Final Frontier * Conclusion: Paradise Lost?

GOR010239480
Utopia: The History of an Idea by Gregory Claeys
Gregory Claeys
Used - Like New
Paperback
Thames & Hudson Ltd
2020-01-09
224
0500295522
9780500295526
N/A
Book picture is for illustrative purposes only, actual binding, cover or edition may vary.
The book has been read, but looks new. The book cover has no visible wear, and the dust jacket is included if applicable. No missing or damaged pages, no tears, possible very minimal creasing, no underlining or highlighting of text, and no writing in the margins.