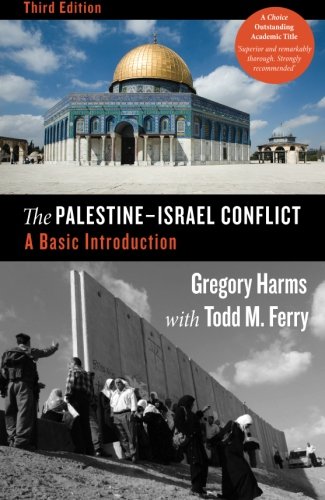 The Palestine-Israel Conflict
by Gregory Harms

Out of Stock
$17.49
inc. GST
Fully updated and expanded edition of the classic best-selling primer on the Israel/Palestine conflict.
Very Good
Only 0 left

The Palestine-Israel Conflict: A Basic Introduction by Gregory Harms

The Palestine-Israel conflict is the most notorious and ingrained conflict of the twentieth, and now twenty-first, century. Yet the way it is reported in the media is often confusing, leading many to assume the hostilities stretch back to an ancient period.

The Palestine-Israel Conflict is the first book to provide a clear, accessible, and annotated introduction that covers the full history of the region, from Biblical times until today. Perfect for the general reader, as well as students, it offers a comprehensive yet lucid rendering of the conflict, setting it in its proper historical context. Harms and Ferry show how today's violence is very much a product of recent history, with its roots in the twentieth century.

This balanced account is now fully up to date, including the ongoing situation in Gaza, making it a valuable resource for anyone who wants a clear guide to the conflict between Israel and the Palestinian territories, and its place in the history of Middle Eastern affairs.

This superior and remarkably thorough, if brief, study of the Holy Land enigma is strongly recommended as an introduction. -- Choice
An indispensable, basic introduction. -- Gabriel Kolko, Distinguished Research Professor Emeritus at York University in Toronto and author of The Age of War.
A tour de force in the depth and breadth of its research and in its clarity. -- John K. Cooley, veteran foreign correspondent and author of Unholy Wars.
Gregory Harms has taken an enormously complex issue and made it engagingly accessible. An intelligent, thoughtful and comprehensive introduction to a terribly and consistently misunderstood conflict. -- Sara Roy, Senior Research Scholar, Center for Middle Eastern Studies, Harvard University, and author of Failing Peace.
This work, written with a relaxed informality, is especially good at highlighting key issues. Sensitive to the perceptions and feelings of both Israelis and Palestinians, the book becomes increasingly detailed as its narrative reaches the contemporary conflict. It will be especially helpful to students and to adult readers with no prior knowledge of the Middle East in general or of the Palestinian-Israeli conflict in particular -- Arthur Goldschmidt Jr., Professor Emeritus of Middle East History at Penn State University and author of A Concise History of the Middle East

GOR007198198
The Palestine-Israel Conflict: A Basic Introduction by Gregory Harms
Gregory Harms
Used - Very Good
Paperback
Pluto Press
2012-06-14
288
0745332137
9780745332130
N/A
Book picture is for illustrative purposes only, actual binding, cover or edition may vary.
This is a used book - there is no escaping the fact it has been read by someone else and it will show signs of wear and previous use. Overall we expect it to be in very good condition, but if you are not entirely satisfied please get in touch with us.