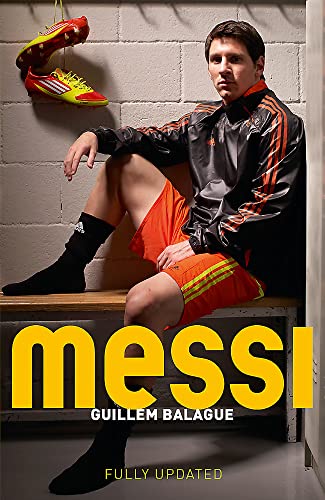 Used Price
$19.99
inc. GST
Free Shipping in Australia
The story of one of the greatest footballers of all time, Barcelona and Argentina's Lionel Messi. Updated to include events up to and including the 2018 World Cup.
Like New Very Good

UPDATED TO INCLUDE THE 2018 WORLD CUP

The story of one of the greatest footballers of all time, Barcelona and Argentina's Lionel Messi.

Despite all the fame and adulation, remarkably little is known about Lionel Messi, the modest and intensely private footballing genius. Just how did the boy from Rosario, Argentina, become the world's greatest player?

Guillem Balague has had unprecedented access to Messi's inner circle: his coaches, team-mates and family. In addition, Pep Guardiola has provided exclusive analysis of the player. The result is an authoritative and compelling account of the wonderful mystery that is Messi.

You may know a lot of the Messi legend already, but his is still a fascinating backstory. * Four Four Two *
There's certainly some interesting insight and information...particularly Balague's understanding of Argentinian politics, culture and mores. ...The book glows with extended testimonies from those who ever coached or mentored Messi. -- David Stubbs * WHEN SATURDAY COMES *

Guillem Balague is the author of Messi, Barca, Pep Guardiola, A Season on the Brink, Cristiano Ronaldo, which won the British Sports Book Football Book of Year award in 2016, and Brave New World, his bestelling biography of Mauricio Pochettino. A key fixture of Sky Sports' coverage of Spanish football for many years, he now broadcasts on BBC Radio 5 Live and for LaLiga TV from Barcelona. He is also the UK Correspondent for AS, the Madrid-based Spanish sports newspaper, and El Larguero, Spain's most popular sports radio show. His work appears regularly in The Times and in Champions magazine, where he writes a regular column on international football. He is the Director of Football of Biggleswade United, and he won Influencer of the Year 2016 in the Football Blogging Awards.

GOR010028316
Messi by Guillem Balague
Guillem Balague
Used - Like New
Paperback
Orion Publishing Co
2014-10-09
672
140914660X
9781409146605
N/A
Book picture is for illustrative purposes only, actual binding, cover or edition may vary.
This is a used book - there is no escaping the fact it has been read by someone else and it will show signs of wear and previous use. Overall we expect it to be in very good condition, but if you are not entirely satisfied please get in touch with us.