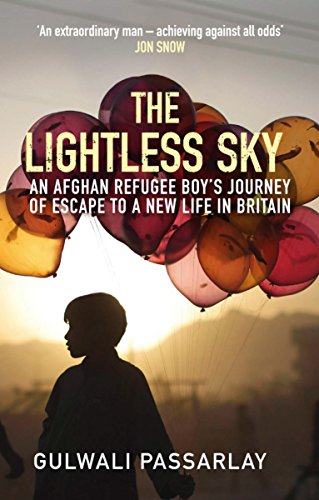 Used Price
$26.49
inc. GST
Free Shipping in Australia
One of the most astonishing memoirs of 2015 - the boy who fled Afghanistan and endured a terrifying journey in the hands of people smugglers is now a young man intent on changing the world. His story is a deeply harrowing and incredibly inspiring tale of our times.
Very Good Good

The Lightless Sky: An Afghan Refugee Boy's Journey of Escape to A New Life in Britain by Gulwali Passarlay

'To risk my life had to mean something. Otherwise what was it all for?' Gulwali Passarlay was sent away from Afghanistan at the age of twelve, after his father was killed in a gun battle with the US army. Smuggled into Iran, Gulwali embarked on a twelve-month odyssey across Europe, spending time in prisons, suffering hunger, cruelty, and violence. Like so many of the migrants we hear about, he endured a terrifying, life-threatening journey on a tiny boat in the Mediterranean, braved the brutality of those who should care for children, and spent a desolate month in the camp at Calais. Somehow he survived, and made it to Britain, no longer an innocent child but still a young boy alone.

Here in Britain he was fostered, went to a good school, worked hard and won a place at a top university. Gulwali was chosen to carry the Olympic torch in 2012. He wants to tell his story - to bring to life the plight of the thousands of men, women and children who risk their lives to leave behind the troubles of their homelands. Many die along the way, some are sent back to face imprisonment and possible death, some survive and make it here, to a country which offers them the chance of a life of freedom and opportunity. One boy's experience is the central story of our times. This memoir celebrates the triumph of courage and determination over adversity.

An extraordinary man - achieving against all odds -- Jon Snow * Twitter *
'Riveting' * The Bookseller *
[A] powerful account of a year-long journey to Britain... As the reader, you want to hug the boy, and punch the air with pride at this woman, who epitomises the best of the West. As a call for Europe and Britain to do more for the world's refugees, the book is as powerful as that harrowing picture of the dead toddler on the beach. * The Times *
This is a harrowing but necessary must-read about an exceptional young man. * Stylist *
The Lightless Sky is a heart-rending read that illuminates the plight of unaccompanied minors forced to leave their homes and loved ones. [Passarlay's] fierce intelligence is apparent throughout... His powerful account is a testament to the courage of all those fleeing conflict in search of safety. * The Independent on Sunday *
[A] beautifully written portrayal of a frightened 12 year-old boy cherishing dimming memories of his family, spurred on by an almost supernatural kind of hope. It should be required reading in British schools. * The Big Issue *
A Book of the Year * New Statesman *

Gulwali Passarlay was sent away from Afghanistan as a young boy, fleeing the conflict that had claimed his father's life. After an extraordinarily tortuous journey across eight countries, Gulwali arrived in the UK a year later and has devoted his new life to education. Now twenty-one years old, he is set to graduate from the University of Manchester with a degree in Social Science. Gulwali is a member of many prestigious political, aid, and youth groups, each a stepping stone to his ultimate goal: to enter a life of politics. In 2012 he was invited to carry the Olympic torch.

GOR007054537
The Lightless Sky: An Afghan Refugee Boy's Journey of Escape to A New Life in Britain by Gulwali Passarlay
Gulwali Passarlay
Used - Very Good
Hardback
Atlantic Books
2015-10-15
384
1782398449
9781782398448
N/A
Book picture is for illustrative purposes only, actual binding, cover or edition may vary.
This is a used book - there is no escaping the fact it has been read by someone else and it will show signs of wear and previous use. Overall we expect it to be in very good condition, but if you are not entirely satisfied please get in touch with us.