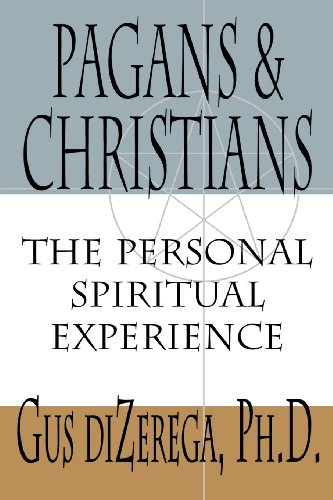 Pagans and Christians
by Gus DiZerega

Used Price
$20.99
inc. GST
Free Shipping in Australia
This comparison and discussion of the differences between Paganism and Christianity includes an examination of the eight distinguishing characteristics of Pagan spirituality, and a Pagan perspective of evil, Satan, and suffering.
Very Good Well Read

Pagans and Christians: The Personal Spiritual Experience by Gus DiZerega

This comparison and discussion of the differences between Paganism and Christianity includes an examination of the eight distinguishing characteristics of Pagan spirituality, and a Pagan perspective of evil, Satan, and suffering. The book deepens the discussion of Paganism's theological and philosophical implications, penetrating its inner truths, and examining reasons for its modern growth. For Christians, it de-mystifies Paganism, offering respectful answers to criticisms levelled at Pagan beliefs and practices. Discussed within are issues such as, spiritual outlooks, encounters with deities, the sacrilization of the year in Wiccan practice, and the sacred role of sexuality.

"* "How can two faiths apparently so dissimilar both be spiritually valid? This small book will answer these questions." - author Gus diZerega"

Gus Dizerega (Washington) is a Third-Degree Gardnerian Elder. He spent six years studying with Brazilian shaman Antonio Costa e Silva, and with other teachers in Native American and Afro-Brazilian traditions. With a PhD in Political Science/Theory from the University of California-Berkeley, he has spent the past sixteen years in the academic field, teaching on the faculties of several universities and colleges. He is a frequent conference lecturer, panelist, or speaker and writer on topics such as environmental issues, community and society, contemporary politics, modernity, and religion.

As an author of both scholarly and spiritual material, his articles have appeared in numerous publications, both in the US and abroad. His first book, Persuasion, Power and Policy: A Theory of Democratic Self-Organization, was published in 2000 by Hampton Press.

GOR002972153
Pagans and Christians: The Personal Spiritual Experience by Gus DiZerega
Gus DiZerega
Used - Very Good
Paperback
Llewellyn Publications,U.S.
2001-02-06
264
1567182283
9781567182286
N/A
Book picture is for illustrative purposes only, actual binding, cover or edition may vary.
The book has been read but remains in clean condition. All pages are intact and the cover is intact. Some minor wear to the spine.