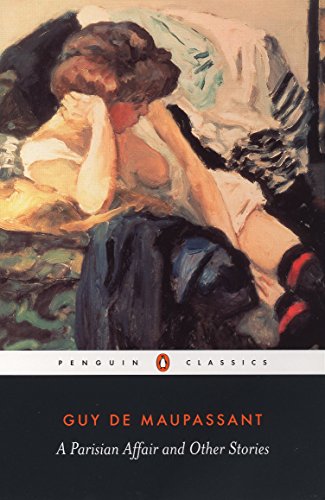 A Parisian Affair and Other Stories
by Guy de Maupassant

Used Price
$18.99
inc. GST
Free Shipping in Australia
Include thirty-three tales that focus on the relationships between men and women, between brothers and sisters, and between masters and servants. This title explores the dualistic nature of the human character and reveals nobility, civility and generosity, vanity, greed, and hypocrisy.
Reviews:
Trustpilot
Like New Very Good Good Well Read

A Parisian Affair and Other Stories Summary

A Parisian Affair and Other Stories by Guy de Maupassant

Set in the Paris of society women, prostitutes and small-minded bourgeousie, and the isolated villages of rural Normandy that de Maupassant knew as a child, the thirty-three tales in this volume are among the most darkly humorous and brilliant short stories in nineteenth-century literature. They focus on the relationships between men and women, as in the poignant fantasy of 'A Parisian Affair', between brothers and sisters, and between masters and servants. Through these relationships, Maupassant explores the dualistic nature of the human character and his stories reveal both nobility, civility and generosity, and, in stories such as 'At Sea' and 'Boule de Suif', vanity, greed and hypocrisy. Maupassant's stories repeatedly lay humanity bare with deft wit and devastating honesty.

Customer Reviews - A Parisian Affair and Other Stories

Guy de Maupassant (1850-93) was a literary disciple of Flaubert and one of the group of young Naturalistic writers that formed around Zola. Maupassant's contribution to the Naturalists collaborative collection of tales, Les Soirees de Medan, was 'Boule de suif', which remains one of the most well-known of the hundreds of stories he wrote over the course of his life and on which his literary reputation now rests. He also wrote six novels, including Bel-Ami (1885) and Pierre et Jean (1888).

Sian Miles was born in Wales and educated there and in France where she lived for many years. She now teaches at Warwick University and is the author of an anthology of the writings of Simone Weil, and translations of George Sand's Marianne, Violet Trefusis's Echo, and has collaborated on Paul Valery's Cahiers/ Notebooks.

GOR008718311
A Parisian Affair and Other Stories by Guy de Maupassant
Guy de Maupassant
Used - Like New
Paperback
Penguin Books Ltd
2004-06-24
352
0140448128
9780140448122
N/A
Book picture is for illustrative purposes only, actual binding, cover or edition may vary.
The book has been read, but looks new. The book cover has no visible wear, and the dust jacket is included if applicable. No missing or damaged pages, no tears, possible very minimal creasing, no underlining or highlighting of text, and no writing in the margins.